You are here: Home / Health / Radioactive Boars in Germany are Result of Chernobyl‎ Disaster

Radioactive Boars in Germany are Result of Chernobyl‎ Disaster

Chernobyl‎ Disaster in the Soviet Union occurred almost before 25 years, though the radiation is lasting thousands of kilometers in Germany till now. According to German officials, radioactive boars must not be eaten by the residents as they are very dangerous as well as the mushrooms that the pigs dine on are not healthy for consumption. All boars hunted in specific regions of Germany are affected by fallout from Chernobyl so once they are killed, radiation levels must be checked in them. 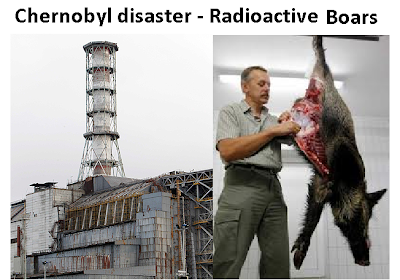 Nearly 950 miles (1,500 kilometers) from Chernobyl, the boars are native to forests and annually about 50,000 boars are hunted in Germany out of which 2 percent are found to be above the legal radioactivity limit. Environment Ministry spokesman, Thomas Hagbeck told that hunters have been paid by the government around $650,000 as compensation more than the past 12 months.

The animals have the levels of radioactive cesium-137 in their tissue that are tens of times beyond the suggested limit for consumption and thousands of times on top of normal. In the soil, radioactive cesium-137 is found that rise in levels over time. It is alleged that cancer can be caused due to the high levels of cesium in the body. It’s very tough to avoid wild boar since the cesium is collected on the ground and in search of food they inhale the soil.

A radiation expert at Germany’s Institute for Applied Ecology in Freiburg, Christian Kueppers said, “We still feel the consequences of Chernobyl here.” Further added, it could still be more than a few years before the problem of radioactivity reduces. Executive director of the Association of Bavarian Hunter, Joachim Reddemann told that he has to throw away meat which tastes delicious seems to be a sad feeling.

France and Austria are also affected by this effect including German pig. Radiation levels have fallen drastically although there is still soil contamination in France whereas there are also traces of radioactive cesium in the soil in Austria that affected deer, pork and mushrooms.

Now Japan must learn from these three countries as the threat signal future problems here. Presently, authorities in Japan have issued a ban on eating food products like sale of milk, spinach, cabbage, etc which are produced within a radius of 30 kilometers from the Fukushima Daiichi plant that leaked because of the earthquake and tsunami.