Ehlers-Danlos Syndrome (EDS) is a rare genetic disorder which exists when the amalgamation of collagen is not successful. As collagen reduces elasticity and the severity of disorder can range from mild to life-threatening. This syndrome is characterized by extreme hyper mobility, which means the joints bend in each and every way without any clarity because to which way they may bend and when, leading to constant dislocation. Olivia Court was born with a severe form of this Ehlers-Danlos Syndrome (EDS), causing her joints to be hyper-flexible, according to the U.K. press. 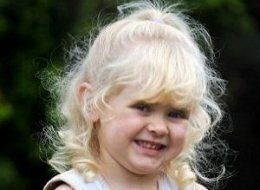 A toddler, Olivia Court born with a rare condition that means her knees and hips painfully dislocate every time she tries to play or even walk. Olivia Court is three year old, afflicted with the very severe form of this condition, has been through two hip surgeries and has been taken to countless doctors and surgeons so as to find a way to help her walk.

Olivia Court has the most extreme case of the syndrome, as she was born without any hip sockets at all. Now, Olivia wears a specially designed body suit for eight hours a day, five days a week, which lets her muscles to strengthen, and thus helps her to run and play with other children. 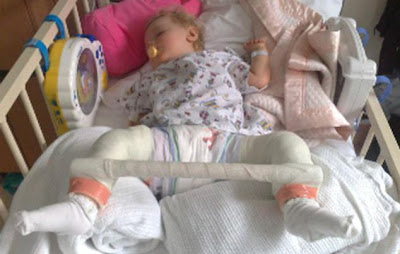 Olivia’s spine and joints are supported enough to prevent dislocation when wearing a revolutionary custom-made lycra suit. Collagen is the mortar that holds your cells together and EDS affects the body’s ability to build collagen. The founder of the Ehlers-Danlos Syndrome network C.A.R.E.S., Inc. in Wisconsin, Lynn Sanders, 52 also suffers from a similar form of Olivia’s disorder, known as hypermobility EDS, which affects the joints and ligaments.

Doctors of Olivia plan to give her a new suit every year and hopes that eventually she will build enough muscle strength to go without a suit at all. The parents of Olivia, Lena, 36, and Adrian, 41 of Leicestershire, thanks the suit for a whole new life for their daughter.

Mother Lena said, “Before the suit Olivia would fall over constantly, her joints would dislocate and she would just topple over. It was heart-breaking. She was always covered in bruises and would regularly miss nursery because she would suffer from chronic fatigue. But the suit has made the world of difference, she can’t stop running around now and her hips haven’t dislocated since. She can play as a little girl should be able to.”

Olivia’s parents had hoped their local NHS Trust would pay for the suit, but they refused funding as they said there was a lack of medical evidence the suit actually worked. Instead, it was paid for by their local community group Barwell and Earl Shilton Lions Club, who raised the money.

Lena said. “A year-ago she couldn’t even stand up unaided and now she is running around everywhere. It really has changed her life”.