A mother Sally Peach, 42 and her daoughter Olivia Coxon, 21 has given birth to their child Luca and Morgan respectively with time interval of 2 months.

Pregnancy is considered as one of the best time in woman’s life, because pregnancy makes woman feel everything about new life that gets nurture in her womb for 9 months. Have you ever thought how all situations are faced by two conceived mothers, who are already in relation of mother and daughter, during their shared pregnancy time? Both of them feel detached from their existing relationship or may feel stress and awkwardness of playing dual role. This kind of situation has come in the life of Sally Peach, 42 and Olivia Coxon, 21. This pregnant mother and daughter combo has given birth to their infants with the time interval of just 2 months! 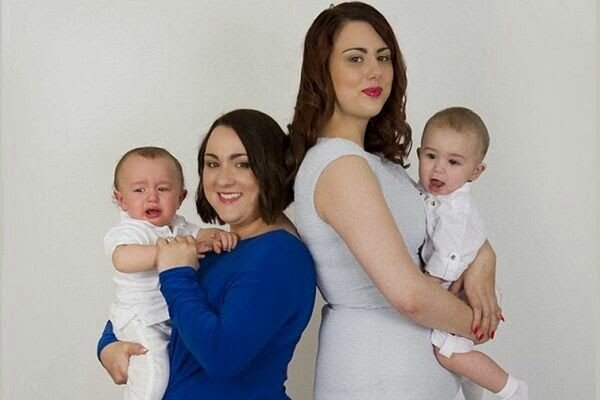 Olivia Coxon, who is daughter of Sally, was suffering from some kind of serious gynecologist problems that do not allow her to conceive. On the other hand, her mother Sally Peach has conceived her fourth child. When Olivia gets the news that her mother is pregnant with her fourth child and she can not even conceive her first baby; she became so much sad and jealous of her mother for short period of time. But with open mind and delicate situation of her mother’s health, she warmly welcomed her baby brother with full heart.

Miraculously, Olivia conceived her first baby when her mother was pregnant with two months. Mother and daughter have spent their pregnancy time under one roof for long, but they stayed at separate place during last months of their pregnancy to avoid all hormonal stresses and tensions. Both mother and daughter gave birth to baby boy namely Luca and Morgan. And both Uncle Luca and nephew Morgan has shared their Christening ceremony together as an indication of happy ending of stress and tension while pregnancy.