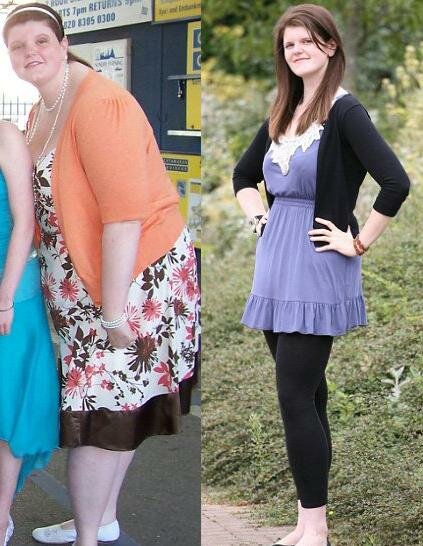 At 19-years-old she was a size 26, weighed 23-and-a-half stone and suffered dangerously high blood pressure and high cholesterol. Kelly Meager is a student of Fine Art University for Creative Arts, Canterbury and got weight loss inspiration idea after seeing pictures from a night out with fellow students. Kelly Meager said that “When I saw the pictures the next day on Facebook I was shocked – I looked huge.” 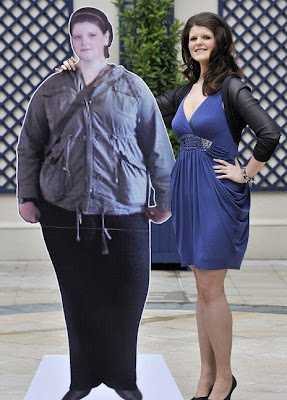 Kelly, who studies fine art in Canterbury, Kent, said: “I was 23-and-a-half stone when I was at university and I used to just stay in my room and eat because I was afraid that if I went out people would say something.

“I’d always been big and at school was really bullied about my size.

“It was a combination of my metabolism and my diet I think and it was a vicious cycle because the more I was picked on the more I would eat.

“And when I was at uni I didn’t know how to cook so I just existed on junk food, microwave stuff and pizzas and croissants.

“I remember one of the worst times was when I was at Alton Towers and I got stuck on a water slide because I was so overweight. The whole ride stopped and an alarm went off and everyone looked. It was horrible.

“Also when I was at the doctor’s once they couldn’t take my blood pressure because my arm was so big. They had to use one meant for people’s legs.

“It was awful to think that my arm was as big as someone’s thigh. I had absolutely no confidence and was picked on loads at school. People I didn’t even know would shout things at me in the street.”

Kelly’s university pal suggested she join Slimming World in October 2008 and amazingly after just one week she had lost almost half a stone.

Kelly, who is more than six feet tall, said: “Everyone there was really welcoming and I was really surprised at how much I was allowed to eat.

“I lost almost a stone in the first month and just went from there.

“Now I’m 12st 12lbs and have so much more confidence than I ever had before.

“I feel like my life has begun now and I’m finally going out and enjoying myself.”

Kelly, from Greenwich, South East London, suffered from high blood pressure and high cholesterol because of her weight and used to eat crisps for breakfasts.

She now eats lots of lean meat and pasta, but still has the occasional chocolate bar as a treat.

She said: “I’ve got a boyfriend, Aaron, who I met about ten months ago and he’s been great too and is really proud of me. My family are also thrilled.

“I want to be a teacher and that dream is coming true now too.

“What was amazing was doing a work placement at my old school and none of my teachers recognising me. It was amazing.”