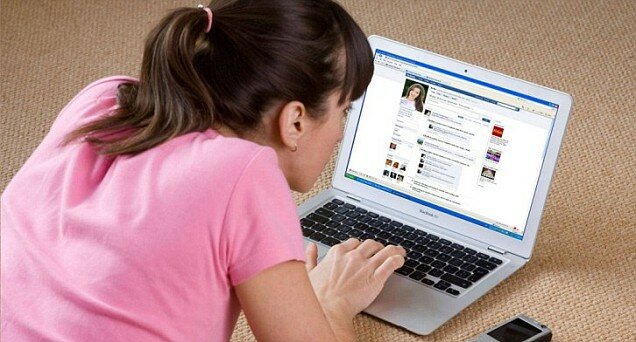 As per latest American Academy of Pediatric clinical research, facebook depression is factual and in some days it could be a clinical term. The research reports describe that researchers have recommended a new phenomenon called ‘facebook depression’ and it is described as depression that builds up when pre-teens and teens expend their much time on social media websites like facebook and then start to show signs of depression’s classic symptoms.

Dr. Gwenn O’Keeffe, a pediatrician of Boston and lead author of new American Academy of Pediatrics social media guidelines, explained that use of social networks certain aspects can harm teens and mostly those who have already lack of confidence. Through some overstated statuses on facebook and friends’ posted happy-looking photos, some kids feel worse about themselves.

That can be more painful and difficult than sitting alone in a crowded school canteen or other real-life encounters. But, an adolescent medical specialist from the University of Wisconsin, Dr. Megan Moreno has researched on social networking among college students. She clarified that using facebook can be a good way for stable teens to enhance feelings of social connectedness as well it have the opposite impression on those prone to depression.

Several youngsters say they have never faced that type of depression problems that caused by facebook, however confess that social networking can lead to this condition.

Some time some people use it to make fool to their friends, but it can be proved some time wrong and also resulted in to the high depression. For example, one 18 year old adolescent who suffered awfully when he rejected by his girlfriend and she also removed his from her facebook friends list. So to make her fool, he created his one more account. By this new account he entered in her account and he discovered that his ex-girl friend had made new male friends who very friendly with her. After this fact, he suffered from asthma attack. Then he always saw her pictures or comments on facebook. This repeating crisis was resulted in to long time asthma, but to control it he used medicine. When he was examined by doctors, they say that serious asthma crises can be caused from mental stress and anxiety.

Psychologists advise that not compare the online conversations of facebook with real interaction. So the people who use facebook too much, they may suffer from some health problems especially those people who make it addiction.

Therefore, Dr. Gwenn O’Keeffe gives advice to parents that they need to realize how their children use social media, thus they can set suitable limits for them.

Recommendation of AAP (American Academy of Pediatric) for families to navigate the social media website: