9 years old, Yuto Miyazawa is genius in music and has surprised music lovers around the world with his rock music. This Japanese child is the god-gifted person because of his ability of playing the guitar which does not find in other person of his age. Yuto Miyazawa was called to the US to perform and show his talent, when his astonishing talent begun to catch fame in Japan and a few American people also got to know about this genius. 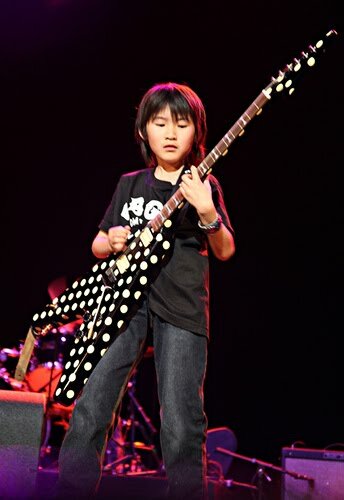 Yuto Miyazawa was born on February 21, 2000, in Tokyo, Japan, where he lives with his parents now. At the age of three years, Yuto Miyazawa has been playing guitar. Guinness Book of World Records named Miyazawa as “The Youngest Professional Guitarist” in August, 2008. Miyazawa has performed with numerous music legends over the past year such as G. E. Smith, Galactic, Les Paul, Ozzy Osbourne, and Deep Banana Blackout.

He has come into view at Madison Square Garden, the famous B. B. King’s, Chris Noth and Steve Walter’s The Cutting Room, Rodeo Bar in New York City, and at the Gathering of the Vibes festival this past summer. On The Ellen DeGeneres Show, Miyazawa performed Crazy Train playing guitar and singing lead vocals in May 2009. Ozzy Osbourne and Randy Rhoads are his musical idols.

He played Ozzy’s song and sung it along with playing the guitar and amazed the audience. He showed his guitar to be an official Rhoads edition polka-dot Gibson Flying V. Ozzy Osbourne came on stage to give words of encouragement and awarded him a plaque framed in gold, after the performance. With Ozzy, Yuto seems on stage at Blizzcon 2009 to play Crazy Train as the first encore performance. Yuto came back on The Ellen DeGeneres Show and played “Paranoid” in 2010.

Video of Nine-year-old Guitar Player “Yuto Miyazawa” on ellen 2009-may-11 from youtube: