You are here: Home / Entertainment / Youtube’s 2 days countdown for Life in A Day project

Youtube’s 2 days countdown for Life in A Day project

The Countdown has started. YouTube has begun its 2 days countdown to the July 24 for “Life In A Day” documentary project. The main aim of this project is to create the world’s largest user-generated feature film: a documentary, shot in a single day, by you. 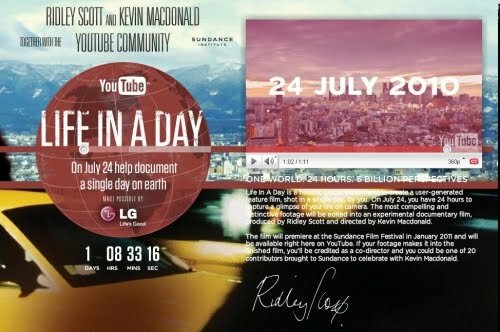 YouTube declared in the first week of July that on 24th July, 2010 YouTube users can participate in a historic global experiment by coming up with a documentary of their own life in the whole 24 hours on July 24. One can have 24 hours to capture a glance of their life on Camera on 24th July, 2010. The most coercing and typical footage will be edited into an experimental documentary film which was executive produced by Ridley Scott and directed by Kevin Macdonald and YouTube is an official video partner.

Around the world, YouTube is hoping that at least 10,000 users will upload content to feature in ‘Life in a Day’ and it has teamed up with the US production company Against All Odds to provide people in more remote parts of the world with access to filming equipment. Anna Bateson, director of marketing at YouTube EMEA, said: “‘Life in a Day’ is all about pushing the boundaries of film and finding new ways to connect the world in inspiring and creative ways. LG’s sponsorship proves that YouTube offers brands a creative playground to associate their brands with.”

The finished product will also be screened at the Sundance Film Festival 2011 with the video uploader also going there as a reward. If participants do not have any additional way of recording (and monitoring) sound, then please be aware of the following:

You can do to help spread the word about Life In A Day: