You are here: Home / Entertainment / www.Redbox.com/thanks – Redbox Thanks offer on Billion Movie Rent

The popular DVD rental provider, Redbox has now rented their one billionth movies this weekend. To celebrate, it is offering free one-night rental to everyone and the chance to win prizes with a Thanks a Billion Giveaway. Thanks a Billion Giveaway has been started from 1 September 2010 and it will end on 30 September 2010. Renters can receive a code for a free movie rental by entering the DVD code from their Redbox rental at Redbox.com/thanks. 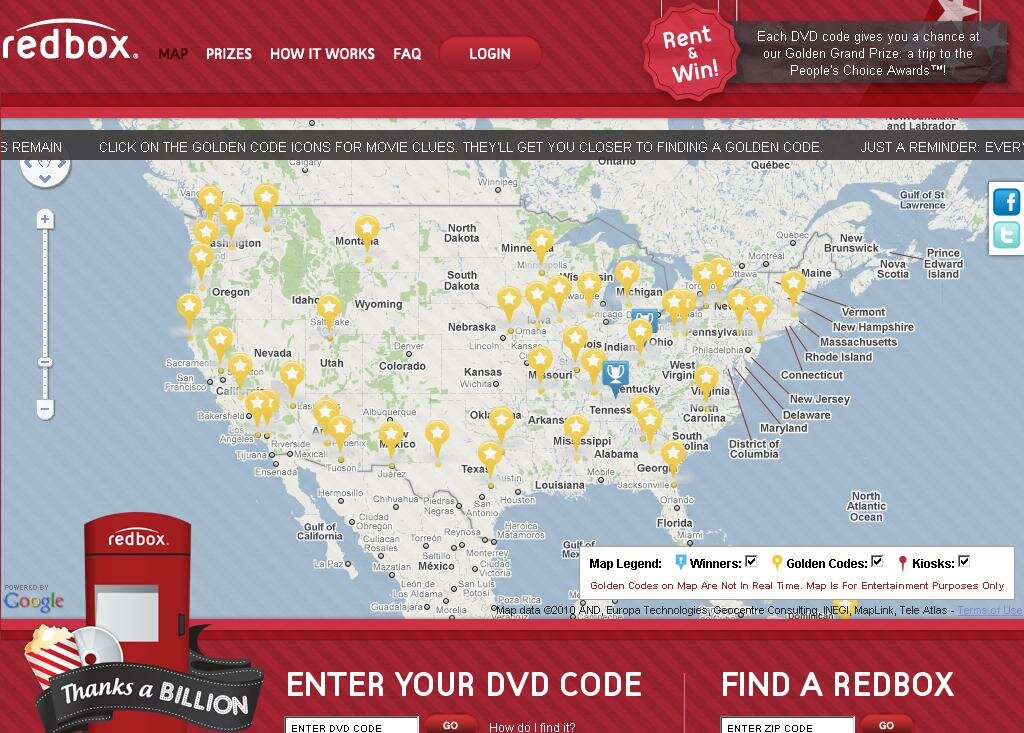 www.Redbox.com/thanks website offers Thanks a Billion Giveaway, in which no purchase or rental is necessary. An American company, Redbox specializes in the vending of rental DVDs via self-service/interactive kiosks. Since December 2009, there were about 22,000 machines in operation. Redbox Company is situated across the United States in fast food restaurants, pharmacies, grocery stores, and convenience stores.

The company’s kiosks are located across the United States in fast food restaurants, pharmacies, grocery stores, and convenience stores. The machines sport the company’s signature red color and arched top surface, visible in the corporate logo. The Entertainment Merchants Association ranked a subsidiary of Coinstar, Redbox as the fifth largest DVD rental company by revenue in the United States in April 2007. Thanks a Billion Giveaway has been started from 1 September 2010 and it will be ended on 30 September 2010. There is limit to enter this sweepstakes that is one free Code per valid mail-in request.

To participate, participant must be a legal resident of any one of the fifty (50) United States, D.C., or Puerto Rico and eighteen (18) years of age or older on the date of the Promotion period. To enter Thanks a Billion Giveaway, participants must participate first way, by renting a movie and going online to redbox.com/thanks by submitting the Code and other required information during the Promotion Term. Individuals participating by rental can find their Code directly on the inner ring of the rental disc itself.

Second way is, obtain a Code by mail, without a rental or purchase, and participate by going online to redbox.com/thanks to obtain a Code to play for one chance to win an Instant Win Prize and to obtain one entry into the Grand Prize drawing, eligible individuals can mail a self addressed, stamped envelope including his or her handwritten, first name, last name, address, city, state, ZIP code, at

Participant can get many prizes like a trip for the grand prize winner, hotel accommodations for four nights for Grand Prize winner, a Sony home theatre package of $3720, one fifty-two inch NX800 HDTV; one 5.1-channel surround sound system; one Blu-ray player; and twelve Blu-ray movies selected in Sponsor’s sole discretion. Sponsor’s designated representative will conduct a random drawing on 17 October 2010.

Redbox Automated Retail, LLC is the sole Sponsor of this Giveaway. For getting winner list send your request and a legal-sized, self-addressed, stamped envelope for receipt within three months after the end of the Promotion Term at

For more information about Thanks a Billion Giveaway, visit URL: http://www.thanksabilliongiveaway.com/official-rules