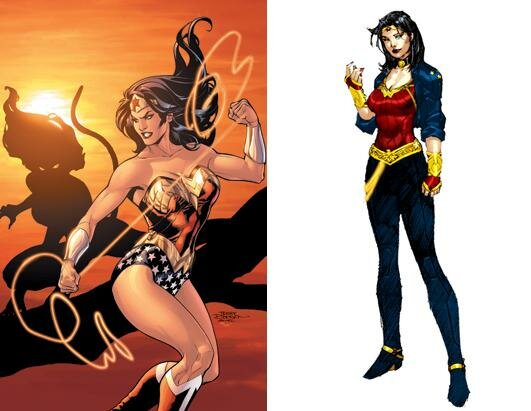 DC Comic Icon Wonder Woman will celebrate her 69th year of existence by wearing a redesigned outfit one that actually looks like the proper apparel for someone constantly engaged in combat in this week’s 600th issue of the monthly comic series. #600 comes out in stores this Wednesday, June 30, written by Straczynski and drawn by Don Kramer and Michael Babinski.

Jim Lee has redesigned her costume as the modern era. BABYLON 5 creator and critically acclaimed writer J. Michael Straczynski and artists Don Kramer and Michael Babinski launch the Amazon Princess into an exciting and epic new era of adventure.

Wonder Woman was first time appeared in CD Comics’All Star Comics 8 which released on December 1941. Wonder Woman’s costume has been relatively unchanged from her boots, tiara and bracelets to its patriotic themes.

The first look of Wonder Woman said to have required the feminist appeal that later versions have had. The first Wonder Woman had all of its signature items including her boots, tiara and bracelet but formerly she wore a skirt. Now according to her new outfits, the original was the change from a skirt to hotpants.

Wonder Woman first time got makeover in the 1960 because of gaving up her powers and became a crime fighting martial artist. Thought the new character DC was progressive, but fans and feminists including Gloria Steinem were not happy. On the cover of the first issue of Ms. Magazine, Gloria Steinem set a giant-sized Wonder Woman and declared her a feminist icon and saying DC had “stripped the character of her power.”

Then DC decided to bring her powers back and now Wonder Woman’s costume has become more revealing, and her character has become darker and more intricate. DC presents the new Wonder Woman after decades of dressing in a star-spangled spandex. The new edition takes away all of the revealing sides of Wonder Woman and puts her in pants and a clothed-all costume. 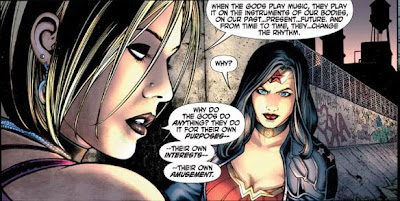 In the reimagining of her story, Wonder Woman, instead of growing up on Paradise Island with her mother, Queen Hippolyta, and her Amazon sisters, is smuggled out as a baby when unknown forces destroy her home and slaughter its inhabitants. With the new costume, Diana will be handling a more unstable future ahead as the God’s decided to lift their protection of the Island.

Incoming series writer J. Michael Straczynski said, “It’s a look designed to be taken seriously as a warrior, in partial answer to the many female fans over the years who’ve asked, ‘how does she fight in that thing without all her parts falling out?”

Straczynski said, “It reflects her origins in both the outside world and the world of Amazons: tough, elegant…a street-fighter’s look which also incorporates elements of her classic design. It reflects the two sides warring for ultimate victory, and underscores the path she must take.”

According to Straczynski, “She can close it up to pass unnoticed … open it for the freedom to fight … lose the jacket or keep it on … it has pockets (the other fan question, “where does she carry anything in that outfit?”), it can be accessorized.”

DC describes the new outfit as “a Wonder Woman look designed for the 21st century” that will allow Diana “to be taken seriously as a warrior, in partial answer to the many female fans over the years who’ve asked, ‘how does she fight in that thing without all her parts falling out?’ …The bracelets are still there, but made more colorful, tied on the inside and over the hand, with a script W on each of them that form WW when she holds them side by side… and if you get hit by one of them, it leaves a W mark. This is a Wonder Woman who signs her work.” 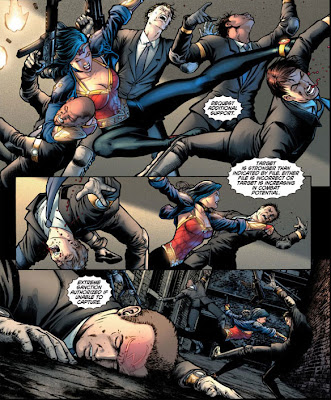 Straczynski also remarked on some of the classic elements that were retained. “The bracelets are still there, but made more colorful, tied on the inside and over the hand, with a script W on each of them that form WW when she holds them side by side…and if you get hit by one of them, it leaves a W mark. This is a Wonder Woman who signs her work … letting her enemies know that she’s getting closer.”

Straczynski noted to DC Comics that the new outfit is Wonder Woman’s “first significant change in her appearance since the character debuted in 1941, with the notable exception of a mod bodysuit briefly sported in the ’60s.”

Straczynski shared in the press release, “The Gods, for reasons of their own but which may have something to with their survival and perhaps the survival of Earth itself, have changed the timeline. In the new timeline, years ago the Gods removed their protection from Paradise Island, and left it vulnerable to attack. And attacked it was. Led by a dark figure, a veritable army descended upon the Island, equipped with weapons that could kill even the Amazons. Outgunned, doomed, Hippolyta gave over her three-year-old daughter to a handful of guardians who spirited her away as Hippolyta led one last desperate battle against the forces that had come to destroy all she had created. In that final battle, she and most of the Amazons were killed, though some managed to escape.”

This new direction will also bring Wonder Woman into opposition with new enemies. “It’s now nearly twenty years later. Diana has been raised in an urban setting, but with a foot in both worlds. She has little or no memory of the other timeline. She knows only what she’s been told by those who raised her On the run, hunted, she must try to survive, help the other refugee Amazons escape the army that is still after them, discover who destroyed Paradise Island and why … and if the timeline can be corrected or not,” Straczynski wrote in DC’s official materials. “She also does not yet have access to her full powers, but will be gaining them as she goes. Along the way, she will face a range of enemies — human and otherwise — who we have not seen before.”

Basically the new look and new direction amount to a rebirth, Straczynski wrote, “This is Wonder Woman reborn, literally and metaphorically: fast, elegant, tough, smart … the savior of her people, their guardian and protector … avenging the fall of Paradise Island, searching to discover why Paradise Island was abandoned by the gods,” Straczynski told to the publisher. “In the end, what she discovers will change her life and the world forever…and she will come face to face with a decision that will mean life or death for the entire human race.”

Given Wonder Woman’s pre-eminence as a female character in the largely male superhero pantheon, her looks have always been a matter of more than casual interest, to both fanboys and feminists.

In a 2006 interview about her work on the series, the novelist Jodi Picoult said: “One of the first things I did was ask if we could give her breast-reduction surgery, because as a woman, I know you wouldn’t fight crime in a bustier. But I was somehow shot down by DC.”