You are here: Home / Entertainment / “Whitney Cummings Money Shot” will air on August 21

On Saturday, August 21 “Whitney Cummings: Money Shot,” a one-hour stand-up special, will premiere on Comedy Central at 11:30 p.m. ET/PT. In the show, “Whitney Cummings: Money Shot”, Cummings commenting on male strippers, fake boobs and getting spanked in the bedroom, among other things, in this hilarious performance taped at Washington D.C.’s Sidney Harmon Hall. She even covers “emotional ninja” tactics used by women all over. 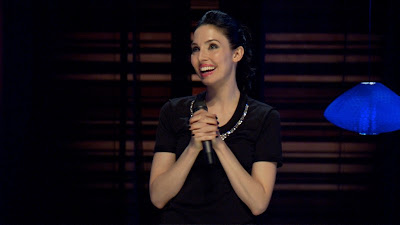 Whitney Cummings is very funny and famous comedy star who has been given the title of “Comedy Star of Tomorrow” by Entertainment Weekly. She became a ‘Comedian of the Year’ this year at the Young Hollywood Awards. She is highly appreciated by lot of viewers. She has a unique and attractive style of giving performance. Nowadays, the 27 year old comedian is very busy and has spent the early months of 2010 touring with Denis Leary and the Rescue Me Comedy Tour.

Cummings, a regular on “Chelsea Lately” and who appeared recently on “The Comedians of Chelsea Lately” and Dane Cook’s “Isolated Incident” tour, has plenty of buzz surrounding her. She made a guest appearance on Comedy Central Roast of David Hasseloff on 15th August, 2010. Comedy Central Roast of David Hasselhoff featuring mocking-jokester team of roastmasters including Whitney Cummings, Pam Anderson, Seth MacFarlane, Greg Giraldo, Lisa Lampanelli, and Gilbert Gottfried.

Cummings will return to the roast stage with her cutting-edge humor in the “COMEDY CENTRAL Roast of David Hasselhoff,” airing August 15 as a follow up to her performance on “The COMEDY CENTRAL Roast of Joan Rivers.” Cummings is a regular on Chelsea Handler’s “Chelsea Lately” and performed in “The Comedians of Chelsea Lately” stand-up special on E! She’s made appearances on “The Tonight Show with Conan O’Brien,” HBO’s “Down and Dirty with Jim Norton” and had roles in “Punk’d” and the film “Made of Honor.” Cummings is also the co-executive Producer of her series, “Live, Nude, Comedy” on Showtime.