Villain, Dubbed version of Maniratnam’s tamil movie Raavanan staring Vikram, Aishwarya Rai, Priyamani etc in lead roles, is all set to hit the screens of Andra Pradesh with 125 Prints in 215 Theaters. Telugu version is also releasing in US Australia and NZ in 25 screens. Reliance big screen and madras talkies releasing this movie. 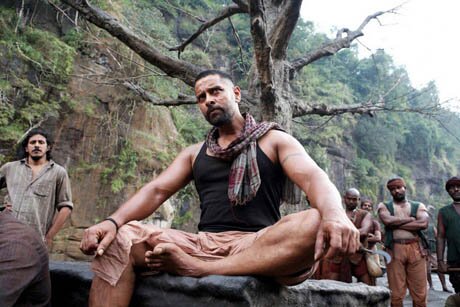 When it’s a Mani Ratnam film you don’t have to tell in particular about the visuals or the music or the costumes or the ‘thats’ and the ‘thises’. Then again, you just cannot stop thinking about the visuals the film had to offer. They were such a treat that watching the film in mute shouldn’t be a bother. But, what’s new in this film is the touch of the abstract. Whenever Veera is thinking of something, a series of quick cuts from various angles and moods are shown. This is a brilliant reference to the ten headed thought process of Raavana (bak bak baka bak). And also the simplicity and yet a complex aura the screenplay creates.

The only draw back of the film is the unimpressive dialogues and songs. Though versatile writer, the late Veturi penned the songs, none of them are impressive. Likewise, dialogues by Sriramakrishna were also pale and lacked any punch. The dialogues appeared artificial and gives you the feeling of watching a dubbing film.

Aishwarya’s age is shown on her face and body. She is not that gracious looking young lady anymore. She looked like a middle aged woman in this film. Her performance is OK in some scenes and good in parts. Prithviraj’s role is very brief and he lived up to the expectations of the director. Karthik’s role resembles Anjaneya in Ramayana. However, he has nothing to do in this film. His overall show is average. Maniratnam might have roped in Prabhu to do the role of Vikram’s brother keeping Kumbhakarna in his mind. Prabhu is good as usual. Priyamani played a guest role (Surphanaka who triggered the war between Rama and Ravana) and made her presence felt with her top notch performance.

Mani Ratnam’s “Villain” raises questions like – “what happens when hate turns to love.
Though like every other film- “Villain” has its slight flaws and loose ends here and there, but it is negligible.
Villain is chicken soup for the senses.

Technically the film is sound in all aspects but it is the writing and the direction that have turned villains to this Villain. Maniratnam’s fans will be forced to sit through the film due to the respect they have on him but others would simply walk out for relief. Even class audiences cannot relish this pathetic treat, leave alone mass people. It will sure end up as a colossal disaster at the box office. Maniratnam did give some commercial disasters in the past but they were critically acclaimed. This film will not fall in that category too. Raavan (Villain) is a DISASTER in all aspects!