You are here: Home / Entertainment / Vanessa Hudgens in SU2C shirt at Stand Up To Cancer 2010

Vanessa Hudgens in SU2C shirt at Stand Up To Cancer 2010 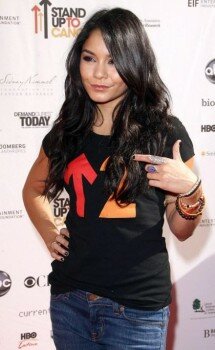 The SU2C special telecasted yesterday on ABC, FOX, NBC, CBS, E!, Style Network, HBO, and more at 8PM ET/PT. More than 100 celebrities including Adam Sandler, Seth Rogen and Neil Diamond were appeared on all four broadcast networks for the “Stand Up To Cancer” telethon. News anchors Diane Sawyer, Brian Williams and Katie Couric hosted this event and produced by Film and TV producer Laura Ziskin, a cancer survivor. Donations to the telecast will go to fund innovative cancer research. The first telethon was raised over $100 million which was organized in the year 2008. Numbers for the 2010 telethon were not instantly available.

The Co-founder and Executive producer of the Stand Up To Cancer telecast, [Laura] Ziskin said, “It is important for young people to be aware of the scope of the problem and the odds that they may face, both for their own future and for their loved ones”. He added, “This piece is about how it is never too soon to take a stand against these devastating and epidemic diseases. Theirs may be the generation that gets us to the finish line. We are so grateful to all the young stars and to Marc Webb and Rich Lee for joining our cause so brilliantly.”

On 11th September, 2010 a commercial free telethon is going to broadcast on Fox, CBS, ABC, NBC, VH1, StyleNetwork, HBO, Discovery Health, G4 and many more channels. Using monies raised to get better treatments for cancer patients, research to fight the disease and to spread the word about what you can do now to help prevent getting it (stop smoking, use sunscreen.) The stars say: ‘It’s up to us to change the odds for our generation, for the ones we love, for our future. ‘If you don’t like the odds, stand up. Stand up to cancer.’

Video of Vanessa Hudgens Stand Up To Cancer: Event (September 10) from YouTube: