You are here: Home / Entertainment / UFC 116 weigh in Results & Highlights

Today on 3rd July, 2010 UFC 116 had their weigh-in at the MGM Grand Garden Arena in Las Vegas, Nevada. The main event Brock Lesnar against Shane Carwin is featured by the UFC 116. It seems that the fight between Brock Lesnar and Shane Carwin is going to be interesting to watch. This match will telecast on the Spike TV channel at 9PM ET and at 10PM ET Main card live on Pay-per-view. 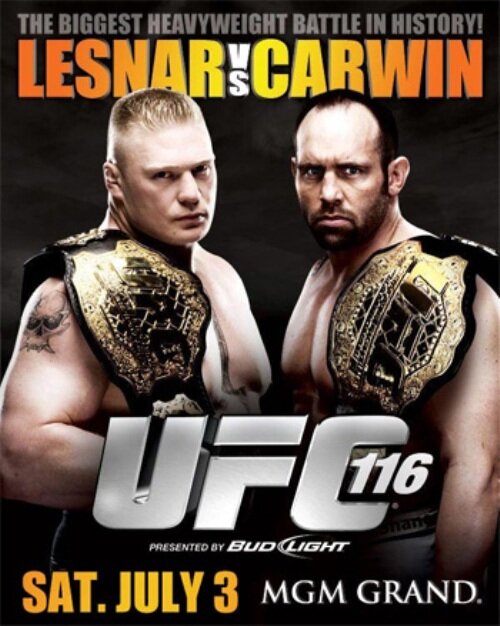 At the initial attempt, the weigh-ins is in for today’s blockbuster PPV, with all fighters competing at UFC 116 making weight. Over 3,000 UFC fans saw the UFC 116 Weigh-In live, as they cheer for their favorite UFC mixed martial fighter. Both gigantic powerhouse fighters weighed in right at the 265-pound limit for their bout, and while their stare own was intense, there were no pre-fight theatrics or fights. Brock Lesnar having a record of 4-1-0 while Shane Carwin having record of 12-0-0.

Defending champion Brock Lesnar will play for world title against interim belt-holder Shane Carwin in a clash of titans. Carwin has destroyed each of his 12 opponents in less than a round. Lesnar has been just as crushing in his victories over Randy Couture and Frank Mir.

As of last week there is no longer an argument for Fedor Emelianenko being the No. 1 heavyweight in the world, and Carwin acknowledged after the weigh-ins the additional prestige the bout carries. “Today we find out who the worst man in the planet is,” said Carwin, who captured the interim title bout in March with a first-round TKO over Frank Mir.

Lesnar, who is fighting in his second straight unification bout, is returning after missing nearly a year of action due to a serious case of diverticulitis. “I’m just excited to get back in the Octagon, it’s been a long road,” Lesnar said. “That’s all I have to say. I’m ready to fight.”

Most of the fighters on the 11-bout card were greeted warmly, and the biggest laugh of the day came when event emcee Joe Rogan introduced the returning Seth Petruzelli as “the man who single-handedly brought down EliteXC.” It was, of course, Petruzelli’s shocking knockout of former EliteXC star Kevin “Kimbo Slice” Ferguson that preceded the organization’s demise a month later.

Lightweight candidate Kurt Pellegrino was also responsible for one of the evening’s stranger moments when – after opponent George Sotiropoulos moved in face to face for a staredown – “Batman” turned to his right and briefly squared off with UFC president Dana White. Pellegrino and White enjoyed a quick laugh, but Sotiropoulos remained unfazed – and appeared a bit annoyed – throughout.

Check out the complete UFC 116 weigh in results and video replay at www.ufc.com.