On Monday, Actor Tony Curtis, the father of Jamie Lee Curtis, was buried in Las Vegas. His son placed a flower on the famous actor’s casket during his funeral as last goodbye. Things like a Stetson hat, an Armani scarf, driving gloves, an iPhone and a copy of his favorite novel, “Anthony Adverse,” a book that inspired his celebrity name and launched a robust film career that spanned decades and genres was put with his dead body. 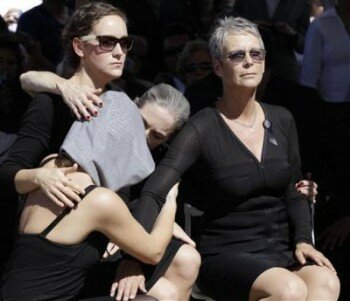 To give honor to Curtis’ life, over 400 celebrities, fans, friends and family members gathered to say goodbye at a public funeral service. Tony Curtis, 85-year-old actor who starred in such films as “The Defiant Ones” and “Some Like It Hot” died due to heart attack at his home in Henderson, Las Vegas. The burial followed the funeral and after that a reception for 200 invited guests at the Luxor hotel-casino on the Las Vegas Strip was arranged.

More than a dozen photographers and television journalists watching the funeral scene and many friends and fans stands outside Palm Mortuary & Cemetery before the funeral. Inside, seven colorful paintings and three black-and-white drawings made by Curtis stood on easels, while a photo of Tony Curtis was projected on a screen. The coffin was covered with an American flag.

Jamie Lee Curtis, daughter of actress Janet Leigh and Tony Curtis, teared up as she described a man who was, she said, “a little meshuga”—Yiddish for crazy—but always full of life. “All of us got something from him. I, of course, got his desperate need for attention,” she joked. For a long period, the father and daughter were estranged but eventually reconciled. Curtis took pride in his daughter’s on-screen credits, including “Perfect,” “Halloween,” “True Lies” and the new comedy “You Again.”

For an impromptu farewell, Schwarzenegger was called by Rabbi Mel Hecht to the front of the room. The Austria native recalled Curtis as a generous mentor who encouraged budding of Schwarzenegger Hollywood career when others told him his foreign accent and name was too much of a handicap. Curtis, whose native Bronx accent initially earned him similar criticism, could sympathize. “You are going to make it,” Schwarzenegger recalled Curtis telling him. “Don’t pay any attention to those guys. I heard the same thing when I came here.”
Schwarzenegger said Curtis refused to feel old. “I mean, who has the guts to take off their clothes at the age of 80?” Schwarzenegger said, recalling Curtis’ naked photo shoot in Vanity Fair in 2005. Jill Curtis was sixth wife of Tony Curtis, eulogized her husband of 12 years. She recalled how he easily dismissed their 45-year age difference when friends asked if he was worried about keeping up with a younger wife. “Well, if she dies, she dies,” she said her husband would deadpan in reply.

Jill Curtis, who Curtis affectionately called Jillie, told The Associated Press her husband would have approved of the festive goodbye. “Tony didn’t like funerals,” she said. “He didn’t want to make it funeral-y, more like a celebration.”Curtis reshaped himself over decades of work and made him impossible to typecast known for his transformation from a pigeonholed pretty boy in the late 1940s and early ’50s to a serious actor.

The metamorphosis was completed in 1957’s “Sweet Smell of Success,” in which he played a sleazy press agent manipulated by a ruthless newspaper columnist (Burt Lancaster). In person, Curtis loved giving friends and fans extra touches that made their face-to-face moments more memorable, longtime friend and pallbearer Gene Kilroy told the AP. “He had a certain way of making everybody feel like they were Spartacus,” Kilroy said.

Curtis was born Bernard Schwartz in 1925, the son of Hungarian Jews who immigrated to the United States after World War I. His father, Manny Schwartz, yearned to be an actor, but work was hard to find with his heavy accent. He instead became a tailor, relocating the family repeatedly as he sought work. Curtis recalled in 1959,”I was always the new kid on the block, so I got beat up by the other kids“. “I had to figure a way to avoid getting my nose broken. So I became the crazy new kid on the block.”

At age of 12, Curtis suffered tragedy when his younger brother was killed in a traffic accident. Finding refuge in movies, he would ditch school to catch matinees starring Errol Flynn, Clark Gable, Gary Cooper and other screen idols. He enrolled in drama school on the G.I. Bill and was doing theater work when an agent lined up an audition with Universal, where he signed a seven-year contract starting at $100 a week at age 23 after serving on a submarine during World War II.

Curtis remolded himself as a character actor and turned to television with the 1970s action series “The Persuaders,” costarring Roger Moore, and a recurring role on the crime drama “Vegas” as his big-screen star faded in the 1960s. Curtis earned an Emmy nomination in 1980 as producer David O. Selznick in the “Gone With the Wind” chronicle “The Scarlett O’Hara War.” He also turned to writing with a 1977 novel, “Kid Cody and Julie Sparrow” and 1993’s “Tony Curtis: The Autobiography.” 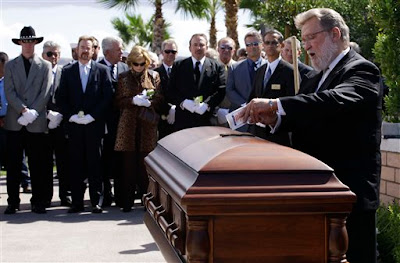 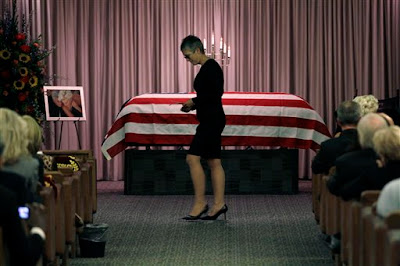 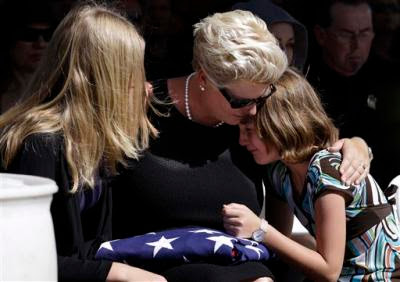 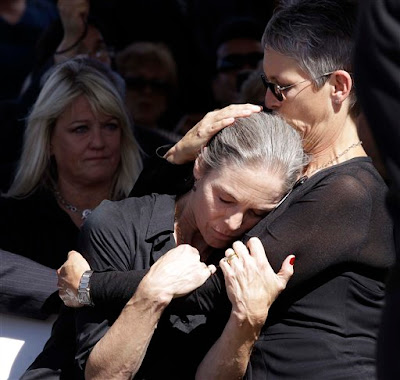 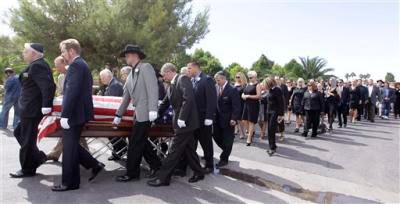