You are here: Home / Entertainment / The Daily Telegraph garden has won in Best in Show at Chelsea Flower Show 2010

It is the second year running that the show garden sponsored by the newspaper has won the top award at Chelsea’s world-famous horticultural event.

It is also a triumph for Mr Sturgeon, who has fought back against a personal tragedy.

Sarah, his partner of many years, died suddenly last June of a heart defect, leaving him with three small children. When they went back to school in September, he returned to work and now has triumphed in the ultimate award in gardening.

The contemporary gravel garden was inspired by holidays in Chile and Tuscany. It was praised for retaining an exotic air while also retaining English planting. The delicate plants in the Mediterranean-style garden also had to battle with the elements after many plants suffered in the cold and frost earlier in the year.

Mr Sturgeon had to beat off stiff competition by some of the biggest names in gardening, including Tom Stuart-Smith and Roger Platts.

But in the end his forward thinking look at a contemporary gravel garden, that does not need much water but retains an exotic air won the day against other modern designs. The garden was inspired by plants admired on holidays in Chile and Tuscany, but has English planting as well as a stately cork oak tree.

A giant replica lock built by Leeds City Council, a teenage paradise complete with a pizza oven for the Children’s Society and an Australian garden by Fleming’s Nursery with a wet bar also won gold awards. 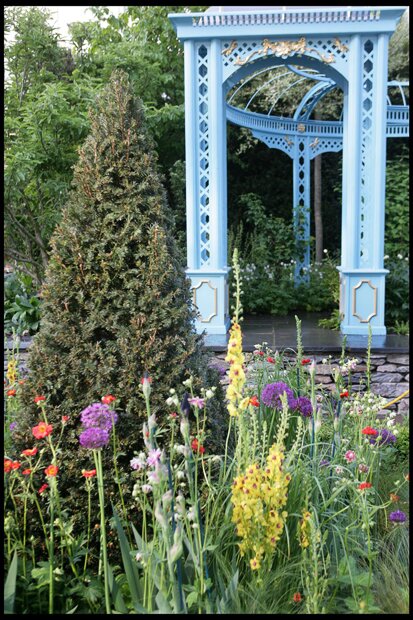