Dil Raju produced telugu movie, Brindavanam released yesterday, 14th of October. Already the music of the Brindavanam music has got optimistic reviews from public and expectedly the movie will also be hit. Brindavanam movie is revolving around love triangles of Junior NTR, Kajal Agarwal and Smantha that keep up viewer’s interest. Entirely, the movie was planned to release on the 8th October, but actually some technical problems the movie was postponed to the 14th October. 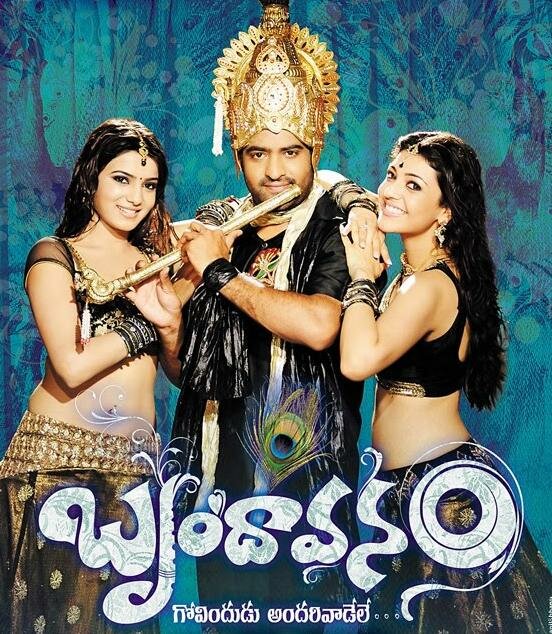 In Brindavanam, stars NTR Jr., Kajal Aggarwal and Samantha are in the lead roles. Bhanu Prasad (Prakash Raj) and Siva (Srihari) are step brothers (rivals) and son of Kota Srinivasa Rao. As lead role Indu (Samantha) is nephew of Prakash Raj while Bhoomi (Kajal Agarwal) Srihari’s nephew. Kajal resides in Village, and Indu sifts to City for her studies.

Krishna (Jr NTR) is a vigorous guy who belongs from a rich family and he is in love with Indu who stays in same city where Indu stays. Incidentally, NTR helps Indu and they both become friends and then they fall in love. Kajal wants to go abroad for further studies. Kajal is being forced into a marriage with the villain’s son. While Prakash Raj sought to arrange Bhoomi marriage with Ajay, Bhoomi says that she is in love with other. Bhoomi comes close to Indu and she requests Krish act like his boyfriend and Indu encourages NTR to act like Bhoomi’s boyfriend. And while NTR approaches to the village to know about exact thing, he finds that Indu and Bhoomi come from same family. The movie summarizes how Krish brings together Srihari and Prakash Raj and with whom he enters matrimony.

As usually, Jr NTR performed his role wonderfully in the film. He sustained good comedy timing and performed action scenes. He attempted to prove some novelty in his performance and the director engraved his character in a storyline way and fulfilled the aspirations of SS Rajamouli, who constantly thought of watching Tarak as an actor who could keep amused the family audiences and partly erase the throng image from him.

Vamsi truly engraved the character by mixing the family image with action scenes to satisfy the throng audiences thereby maintaining the action hero image to him. Kajal gave a sweet look with half-sarees as a village girl and she almost conquered in glamour than Samanta. Mainly, the movie move forward around Kajal. Samanta played urban girl role. She is quite glamorous and appealing. The role of Prakash Raj and Srihari are equal status and they existed to the expectations. Kota Srinivasa Rao is all right in his role as grandfather. The character of Ahuti Prasad is a little lower than his caliber and Raghubabu did fairness to his role. Mukesh Rushi and Pragati are enough. The role of Ajay just came and gone and played some role for climax. Venumadhav, Raghubabu, Ahuti Prasad and Brahmanandam performed best to entertain the audiences.

Koratala Siva’s dialogues are good and spotted with comedy and punch. The vital story is by the director Vamsi Paidipally, the dialogues filled life in it. Music is composed by Thaman that sooths and full of melody and rhythm. Songs’ choreography was good to watch. Cinematography is suitable and he perfectly captured the rural beauty. Action scenes could captivate the mass audiences. By this movie once again Dil Raju back on track.

While Brindavanam might not unavoidably be on the same lines, the idea of exchanging boyfriends is just dramatized and cinematic, but practically it is not possible. With some lively and romantic tracks making the movie an average film. Brindavanam is worth watching movie with the whole family because of entertainment.