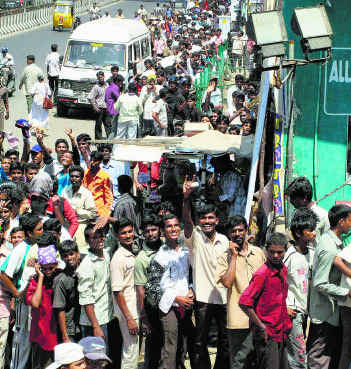 It is releasing worldwide on 1 October 2010 along with its dubbed versions: Robot in Hindi and Robo in Telugu. In this movie, Rajni plays double roles that 1st role is of a scientist and other is of a Robot. Scientist Rajni creates a Robot with artificial intelligence like that of sixth sense in humans to help human beings and to the development of the country.

According to the latest news, within hours the tickets for all the three versions were sold in US. ‘Endhiran’ movie US rights were taken by a US based production house, FICUS Movies. FICUS has taken the rights of Telugu and Tamil versions with Rs. 35 crore and Venus has acquired the Hindi version rights.

It is so strange that even silicon heart falls in love with Aishwarya Rai as well as writes romantic poems and the Robot behave just like a human being. Knowing about the extra ordinary intelligence of the Robot the villains try to get control of the Robot.

Scientist Rajni fights to save the Robot falling into the hand of the enemies and destroys the evil forces using the Robot itself. This movie is one of the most expensive films with a heavy dose of special effects. No wonder then that the film has been in the making for quite some time now. However, there is good news for fans who have been eagerly awaiting this film.