Thrilling reality show, “Swamp People” is an interesting reality show based on the daily lives of people of Louisiana, who live in swamps. In some people, creepy feeling comes out even hearing about swamps; it allows them to alone living in such a place. The people who live there feel that life is normal and easy. 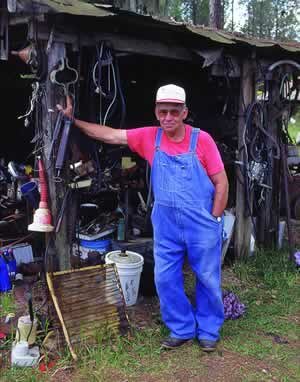 Master hunter Junior Edwards is shown making special weapons with his older son Willie in the latest episode of Swamp People. Specially designed hooks that no one has seen before, are also created by these two master craftsmen. These hooks looked to be made for hunting some swamp animals that doesn’t come in normal interaction. Due to the swamp life is thrilling and extremely adventurous; the show Swamp People has gained a lot of popularity among the people.

As compared to the people living in the cities and even the villages, the people living in swamps have a completely different life style. So the people of the cities are surprised to see the life of the swamp people and the challenges that they have to face. Joe gets into the marshlands along his stepson Tommy, while Edward and Willie are shown busy in making special weapons. The marshlands could be the most dangerous of places where one needs to be extra careful.

Joe L’enfant is a trapper and with his son to trap a water creature for food, he is there. However the son of Joe is a youngster and he does some stupid acts which a teen is expected to do and he gets himself into danger. The fans of the series are pretty excited to see the upcoming episodes of the show. So watch this exciting series to find out more

Video of GHOSTBUSTING- EPD. 2 The Swamp People from youtube: