After meeting on the set of the 1988 movie Bull Durham, actress Susan Sarandon and actor Tim Robbins had been together for some 23 years without marry. Both have two sons named Jack, 21 and Miles, 18. From a previous relationship with director Franco Amurri, Susan Sarandon has a 25-year-old daughter named Eva. 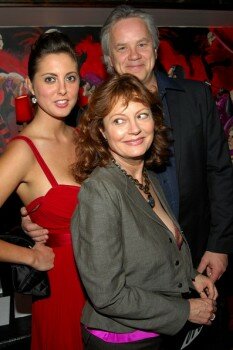 The couple, Susan Sarandon and actor Tim Robbins, quitted their relationship in December. Susan expressed that she never expected that her relationship with actor Tim Robbins will end but also had no intention of marrying him prior to their 2009 split. Sarandon told the UK newspaper The Telegraph, “I’ve always liked the idea of choosing to be with somebody”.

“I thought that if you didn’t get married you wouldn’t take each other for granted as easily. I don’t know if after twenty something years that was still true. People were coming up to me in the street and saying ‘I cried and cried when I heard.’ Well, I was sadder! I didn’t think it would ever happen, either.” She added, “You bring people into your life at certain times”. “Maybe you have a relationship to have children and you realize that it’s fulfilled after that point.”

In the year 1967, Susan married fellow student Chris Sarandon and after 12 years both were separated and decided never to tie the knot again as she thought her relationships would be stronger without an official union, something she is uncertain about. Despite her sadness, the actress believes her relationship with Robbins had run its course. “You bring people into your life at certain times. Maybe you have a relationship to have children and you realize that it’s fulfilled after that point,” she said.

Sarandon has said in the past, “I won’t marry because I am too afraid of taking him for granted or him taking me for granted – maybe it will be a good excuse for a party when I am 80”. Both famous liberal activists, they have never been too political at home with their children. “I’ve never tried to force [politics] on them,” the actress tells Psychologies magazine in its January issue, but adds that the election of President Barack Obama “got them excited.” The family all attended the inauguration in January; though Sarandon insists “our dinner table conversations are rarely political.”

About her 25-year-old daughter, Eva, Susan Sarandon said that she has accomplished quite a lot in her career. Her daughter, Eva Amurri, is also a famous actress. Eva’s father is Italian Director, Franco Amurri. He and Susan Sarandon dated for a few years during the 1980s, and Eva was born in 1985. Here are five other things you may not know about Eva Amurri: