On Monday, July 5, 2010 the brand-leader for children and the largest producer of television animation in the world, Nickelodeon Triton has arranged Independence Day weekend with the premiere of a new SpongeBob SquarePants special, “The Clash of Triton,” at 8:00 p.m. ET/PT. 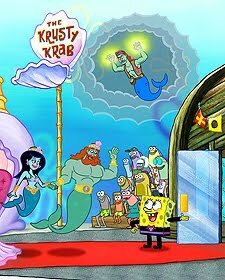 Celebrity guest stars Victoria Beckham as Queen Amphitrite; John O’Hurley as her husband, King Neptune; and Sebastian Bach (Skid Row) as their rebellious son, Triton were featured in the half-hour special. All-new SpongeBob episodes has been telecasted from Tuesday, July 6 to Friday, July 9, at 8:00 p.m. (ET/PT) on Nickelodeon. Brown Johnson, President, Animation, Nickelodeon and MTVN Kids and Family Group said, “We’re happy to have such a talented and eclectic group of celebrities lend their voices to this SpongeBob special”. “Victoria, John and Sebastian truly brought Bikini Bottom’s Royal Family to life!“

“I was so thrilled when I was asked to be a part of SpongeBob as my children love the show,” said Beckham. “When I told the boys that I was going to be on the show, they were so excited! I had such a great time recording the voice of Queen Amphitrite. How fun to be a Queen for a day! We are all looking forward to watching it together.”

King Neptune wants to celebrate his 5,000th birthday at the hottest spot in town – none other then the Krusty Krab in “The Clash of Triton”. SpongeBob and crew spare no expense for the gala, rolling out the red carpet to welcome the royal family. In spite of their best efforts, the absence of Neptune’s son, Triton, brings down the king’s spirits and spoils the festivities for everyone, especially his wife, Queen Amphitrite.

The gang soon studies that Neptune banished his son to a deserted island until Triton is ready to follow in his father’s footsteps. Determined to make this the king’s happiest birthday ever and save the day, SpongeBob sets out to find Triton and bring him back to the party. Unfortunately no one anticipated Triton’s wrath and now Bikini Bottom may get caught in the net of revenge meant for his father.

Once upon a time SpongeBob SquarePants was a bright, cartoony oasis of cheerful inanity and ingenious nonsense. It wasn’t about much of anything, really, except the characters’ happy neuroses. SpongeBob, or Squidward, or Mr. Krabs (or Sandy Cheeks or Patrick Starfish or Mrs. Puff or somebody with a goofy quirk) would just get caught up willy-nilly in a situation and make a donkey of himself or herself in a sublimely entertaining way. There was rarely a “story,” only a lot of perfectly pitched gags working themselves out in baroque variations.

The story takes place under the deep blue sea in Bikini Bottom, where SpongeBob resides. SpongeBob, who is a yellow, porous sponge, is your typical happy-go-lucky character, as he is always cheerful and enjoys making people laugh. Patrick Star, SpongeBob’s neighbor who is a starfish, is your average children’s show idiot, as he boasts knowing nothing and is often getting himself into ridiculous situations.

Between the homes of these two lies the home of the miserable Squidward, an octopus, who is known for being grouchy and playing tricks on SpongeBob and Patrick. Both SpongeBob and Squidward work at the Krusty Krab, a fast food business run by the greedy money-loving Mr. Krabs, a crab, the arch rival of the evil, possibly misunderstood, Plankton. Another neighbor, Sandy Cheeks, an athletic squirrel who normally wears an astronaut’s space suit, was introduced in “Tea at the Treedome.” She spends most of her time inventing and experimenting.