Get spoilers, review and trailer of Sons of Anarchy (an American television drama series) Season 3 that has been started on September 7, 2010.

Read the review and spoilers details of ‘Sons of Anarchy’ new season which has been started from 7th September, 2010 on FX at 10pm. The second season of Sons of Anarchy ended with Jax’s son Abel being kidnapped, a move that heightens the drama for season 3. The Sons of Anarchy Season 3 includes total 13 episodes which will end on 30th November, 2010. 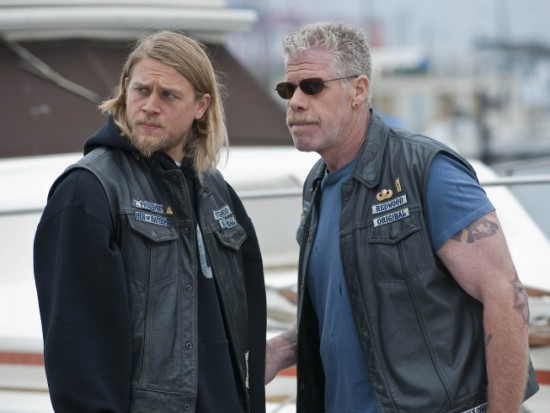 American television Drama series, Son of Anarchy is created by Kurt Sutter who explains that the show has “dual story lines from the jump” and the two plots will come together deeply a few episodes into Season 3. Charlie Hunnam, Katey Sagal, Mark Boone Jr., Kim Coates, Tommy Flanagan, Maggie Siff are playing main role in Season 3.

Jax as well as his SAMCRO cohorts are trying their best to find the kidnapped Abel, who was kidnapped by Cameron. Jakson ‘Jax’ tellers is member of the brotherhood, who discovers his own faithfulness to the group hardened when he experiences its rising anarchy and infamy, while at the same time changing to life as a father. But the main confusing matters are Jax’s mother and stepfather, two cruel persons who occur to be the masterminds behind the club.  In the first episode of the season 3, the aftermath of Abel’s kidnapping has left the Sons reeling, especially Jax, whose pain sends him into deeper turmoil over his future with the MC. In the meantime, Gemma, still on the lam, is hit with some unpredicted news from her past. Sons of Anarchy Season 3 premiere is released with the tilted of ‘So’ on Tuesday.  The second episode of the Sons of Anarchy Season 3 will be released on 14th September, 2010.

Award winning Actor Hal Holbrook is playing a role of Katey Sagal’s character’s father for four-episode. Stephen King has also officially landed a role on Season 3. Taryn Manning will be shown in this season at least for three episodes. In Sons of Anarchy Season 3, losing baby Abel will definitely affect Jax and his relationship with Tara. Creator Kurt Sutter said that he wants to explore what happens to a couple when they’re faced with a tragedy like that.

Last season finished with Gemma on the run from the law after Agent Stahl framed her for murder. The new season reveals Gemma’s family, when she visits her addled father. The new storyline opens Gemma’s emotional side. Once again, she proves that the Emmys are criminally negligent for ignoring her.