Anil Ambani’s Reliance Broadcast Network Limited’s (RBNL) digital wing has launched India’s first ever Talk Internet Radio, which is named as BIG Net Radio that allows users to listen radio channels over Internet. To appeal audiences who seek quick and brief entertainment capsules which help them de-stress, the content available on BIG Net Radio has been designed. The content will be all “talk” array from Bollywood updates, humour and spirituality. The big bummer about this radio station is that there’s no music as of now. Let’s just hope that soon they get some music in there. 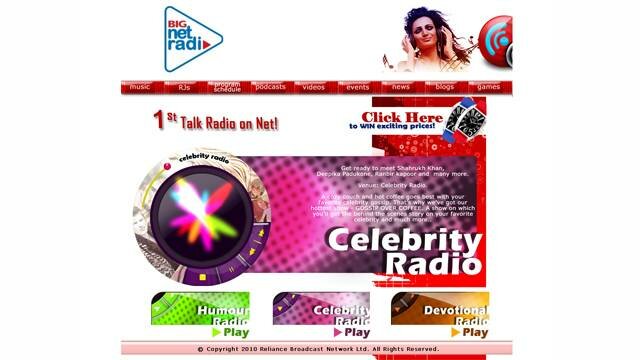 According to the Head of Radio and Digital Business, Soumen G. Choudhury, Reliance Broadcast Network Ltd. India has 50 million internet users and the 18-30 age groups are using it as a medium for entertainment. For advertisers to target, this presents a very focused demographic. He also avowed that online advertising in India is poised to touch the Rs.20 billion mark in 2013 with an anticipated growth rate of 32%. This service will be offered without charge.

In many developed nations, Internet radio is already a popular medium of entertainment. The opportunity for BIG Digital’s BIG Net Radio is incredible with an outstanding chance to monetize through page branding and banners and the 3G revolution knocking at the doors. Reliance Big Net Radio has three channels as of now however; none of them play any music as the name says it is a talk radio.

Soumen G. Choudhury said, ‘this pioneering initiative re-affirms our endeavor to provide India with the entertainment of their choice, which is the latest and in keeping with the times.’

“Internet radio is poised to increase even as Bollywood, spirituality and humour are the pegs that work excellently with Indian audiences and the company is working towards providing 24-hour seamless entertainment to the audience,” Choudhury said. Further he said that, “3G will boost the Internet usage via mobile substantially. It will see a surge in the entertainment consumption through the mobile platform, posing an excellent growth potential for this product through the deployment of BIG Net Radio on the mobile phones”