The marriage of Salman Khan and Asin is the hot topic of Bollywood at the present time. According to the media down south, a few days ago Salman Khan has tied the knot with actress Asin Thottumkal in the attendance of just close friends and her parents were not invited. The report also recommended that Asin’s parents rushed to the wedding and tried to discontinue it. In reality however it’s just fake news as some mischief mongers created a rumor regarding marriage by using a photo from Hindi ‘Ready’ movie in which both are clothed up as bride and bridegroom. 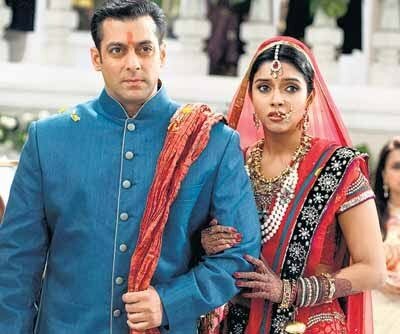 ‘Ready‘ is the Tollywood super hit film, which is now remade in Bollywood with Salman and Asin playing lead roles. In Punjabi custom, recently both got married as it was one of the parts of shooting. After these pictures released on the net, it has been used to remark on Asin by Media. Asin was showered with lots of congratulatory calls and messages as several people supposed it true. When the actress heard about this news, she could not stop laughing and affirmed that those all are rumors.

Asin said, “This was my first marriage with Salman and I had many marriages in Tollywood and Kollywood too”. She just gave a smile when asked if it is Real Marriage or Film marriage. Now on the sets of Ready, the topic ‘marriage’ has become the source of continuous jokes with Salman banter Asin and showing to each that he’s finally married.