On Wednesday night, 49-year-old individual cook, Raj Brandston was eliminated from third episode of the “Hell’s Kitchen” season eight. Brandston of Queens, N.Y. was shocked when Gordon Ramsay asked him to leave the show. He was not happy about the decision of Gordon Ramsay. 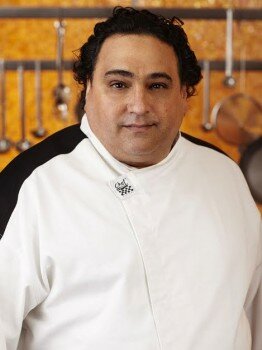 In the season 8 of Hell’s Kitchen, all participates will be divided into separate teams of men and women. On third episode, each team had to make breakfast for the hungry EMTs and even though the menu was simple, there were many bloopers made in the process by the men’s team. They forgot the pineapple in their fruit salad. Boris couldn’t handle the omelets. Raj didn’t remember to season his eggs. It was absolutely awful. They were drowning in the kitchen while the EMTs in the dining room booed them. The main reason the men fell apart was because no one was leading. They were all doing their own thing with no sense that their piece was part of a dish.

Other side, the winning team of women had completed their service before the men put out one entrée. They had happy people in their half of the dining room. The women were asked to step in and save the men from their own mess to make matters even more embarrassing for the men. At the end of the challenge, the women’s team won and the reward was given to them in the form of a luxury meal by the side of the pool and trapeze lessons. And men’s team had to clean the kitchen.

During dinner service, Raj was an absolute mess in the kitchen. There were numerous causes to eliminate him throughout that service, and he was fortunate to see the removal ceremony. Head chef Gordon Ramsay said Raj was not up to par, and he couldn’t stay being close to Raj in the kitchen 1 more second. The challenge was not so hard for Raj. Trev said that it was Raj who brought them down and he had to go home or the team would keep faltering after the challenge. When he lashed out, these feelings were definitely in the forefront of his mind at Raj during the punishment. Raj felt Trev was causing the trouble, but the other men were backing Trev up. If Trev hadn’t taken some cheap shots about Raj’s weight, the argument might have been a bit sounder, but he did have a few good points planted in all that screaming and profanity.

The dinner service didn’t start so well by women though the challenge may have gone well. Emily or Jillian had trouble salting the pasta. Ramsay just yelled at both of them because they both blamed it on each other. Emily said it tasted fine, but Jillian felt it was just one more thing the team couldn’t trust Emily to do. Emily gave the team even more reasons to want her gone when she failed to deliver a dish she had promised to help with. At least Emily didn’t fall asleep while her beef was on fire, though, but Gail did redeem herself later, so I guess she can have one free pass.

Ramsay felt the service was so poor that he let the customer comment cards determine the winner. The women were the losers, and they decided Emily and Sabrina, although their nominations didn’t matter in the end.