The list of VH1 Celebrity Rehab Season 4’s cast members has been announced. Tiger Woods mistress Rachel Uchitel and actor Jeremy London, who once claimed that he was kidnapped and forced to take drugs by 3 armed men, have signed up for the fourth installment of VH1’s “Celebrity Rehab with Dr. Drew,”. 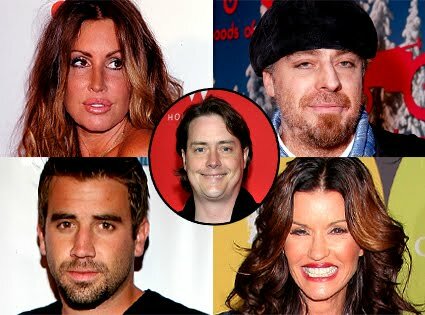 Former “Hills” star Jason Wahler, 70’s heartthrob Leif Garrett, former supermodel Janice Dickinson, socialite Jason Davis and Frankie Lons, mother of R&B singer Keyshia Cole are the other stars confirmed to be a part of the famous Celebrity Rehab 4 with Dr. Drew on VH1. Dr. Drew and the “Celebrity Rehab” team have a couple surprises lined up for the next season of Dr. Drew’s hit VH1 reality show.

In its first three seasons, the show has had nine cast members, but there are seven for season four. The cast announcement follows a long period during which tabloid web sites repeatedly suggested that the season might not happen because of an inability to find a cast.

Eight one-hour episodes will be featured by the show host, Dr. Drew Pinsky and chronicle the patients’ intensive 21-day detox program at the Pasadena Recovery Center with group and one-on-one therapy and nontraditional therapies like art and music. No date had been set for the show’s premiere, but it is expected to air before the year’s end. –Tim Nudd

Last week it was announced that Tiger’s #1 whore, Rachel Uchitel, will appear on the next Celebrity Apprentice. Today it is being reported that she’ll also be on Celebrity Rehab with Dr. Drew. Uchitel only agreed to appear only after producers doubled their offer to $500,000. A VH1 rep says Rachel is addicted to the pills while US says “Rachel is addicted to love.” Uh oh. Sounds serious. Sources add: “She is not an addict. She doesn’t do drugs and isn’t an alcoholic, but she does have problems with relationships“.

London, famous due to “Party of Five” and “Mallrats”, will allegedly get himself treated for several substance abuses. His wife is also undergoing a treatment as per TMZ. On one hand Uchitel’s entry comes as a surprise to many but on the other London’s is almost expected. He hit the headlines last month due to an eccentric incident in which he was supposedly kidnapped by some men who forced him to indulge in ecstasy for a straight twelve hours at gunpoint.

Jason Davis aka Gummi Bear most recently appeared on Patti Davis’ show The Millionaire Matchmaker. His brother is Brandon Davis who is most famous for calling Linsay Lohan a fire crotch. Dickinson, 55, will reportedly address her problems with alcohol, while the nature of party promoter/nightclub hostess Uchitel’s addiction was not known at press time. Frankie Lons stars on BET’s reality docu-drama, “Frankie & Neffe,” which is a spin-off of “Keyshia Cole: The Way It Is,” on which she also starred. Frankie Lons is the mother of R&B artist Keyshia Cole.

Jason Whaler is from “The Hills” he dated Lauren Conrad also from the TV show “The Hills” back in 2006. He was recently busted for a DUI. The other celebrities who will form a part of this show are former teen idol Leif Garrett, ex-model Janice Dickinson and formerly “The Hills” lead Jason Wahler.

This batch of personalities will have to face 21 severely demanding and filmed sessions of detox at the Pinsky-run Pasadena Recovery Center. These episodes will be run later in this year on VH1 who has been striving hard to rope in some well-known faces so as to improve its ratings.