Reality show, ‘Big Money’ will be starting from 10 July 2010 at 9pm. The show will be hosted by actor R. Madhavan. To keep viewers bound, Imagine TV has brought this KBC type show with an opportunity to win price money of Rs.1 crore after ‘Desi Girl’ concluded with Roshni Chopra’s title win. ‘Big Money‘ is the family-based game show by which Multilingual Indian actor R. Madhavan is set to return to the small screen as the host. 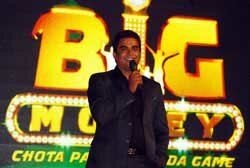 R. Madhavan at the presentation of 'Big Money' show of Imagine TV

Madhavan confirmed the news on microblogging site Twitter by saying, ‘Announcement folks. I am hosting a family-based game show called ‘BIG MONEY’, Chhote Parde ka Bada Game Show on Imagine. Need all your blessings.’ R. Madhavan asserts, “I’m really excited about the show more so about the concept of entire family coming together in an attempt to earn Big Money.“, “According to me this show would incite’shout ability’ among the audience as most of them would know the answers themselves thus creating a different kind of anxiety,” exclaimed by the new concept producer Siddharth Basu.

Siddhartha Basu of BIG Synergy has reportedly produced the show, which will be aired on Imagine TV. The show has different format, in this game, a team of four people related to each other will participate and questions will be posed to them based on what they see on television. To achieve the final big money of Rs. 1crore, the contestants have to pass through a test of 8 rounds. In each round the team would have to choose one topic from the two topics offered to them and then 4 questions related to the chosen topic with two answer options would be asked.

Contestants have to complete the chain by giving all 4 right answers to qualify for the second level. 3 Family insurance are also offered by the format to the contestants that is pass, exchange and discussion which they can use whenever they are confused or unsure about any question.

The official announcement is yet to be made that the prize money of Rs.10 million will also be given away on the show. ‘Saaya, ‘Sea Hawks’, ‘Banegi Apni Baat’, ‘Tol Mol Ke Bol’ and ‘Ghar Jamai’ are the titles of serials in which the actor has previously appeared in major roles.

A gist has been already passed by the promos that the game show would feature questions pertaining to the audio visuals that can be seen on TV which contains popular daily soaps, Advertisements, Reality shows, Cartoons, Cricket, News and more.