Since August 29, she was hospitalized and on an oxygen support ventilator because of breathing problems as she was battling against emphysema, but it was confirmed on October 8 that Ms. Walker had died. Today, Walker thrills audience across the world with over 60 albums, 5 gold records, 10 Grammy nominations and one Grammy Award in 1995. She is well-known for a long list of songs such as Lord Remember Me, Walk Around Heaven and Lord Keep Me Day by Day.
Just at 4 years old, she started singing and delighted audiences all over with her wonderful vocal skills. Walker was inspired from a group performance of “The Caravans” at the age of 22 in 1951 and got global recognition from “The Caravans”. She was lifetime Chicago resident and also member of the West Point Baptist Church.

WVON radio host Pam Morris said Walker was “a living legend” who was liable for launching more than a dozen careers of gospel artists. Bobby Rush (U.S. Congressman) called Walker a voice for the civil rights movement and said her music was “a healing balm to those who struggled for justice.”

In 1929, Albertina Walker was born in Chicago and started singing early in her childhood for the children’s choir in the West Point Baptist church. Walker had organized the Albertina Walker Scholarship Foundation in 1988 to aid financial assistance to those college students who have completed one year or more in music.

Tina Nance (Walker’s granddaughter) said that the gospel star died Friday morning of respiratory failure at RML Specialty Hospital. She remembers her grandmother wowing the cast of the Steve Martin movie “Leap of Faith” when she sang a solo for a scene. Nance said that Steve Martin sent Walker a bouquet with a card that read, “You are truly the greatest gospel singer in the world.” Walker cherished it as she had admired Martin’s comedy. No funeral arrangements of “Queen of Gospel” have been announced yet. 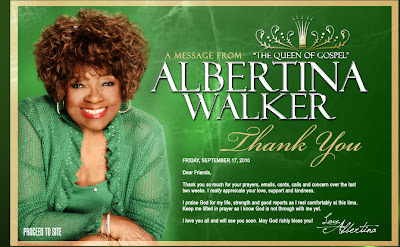 Video of A tribute to the Queen Of Gospel Music, Ms. Albrtina Walker from youtube: