You are here: Home / Entertainment / Pregnant Mariah Carey falls on stage in Singapore

The 40-year-old legendary songbird, Mariah Carey is in spotlight for her pregnancy nowadays. While belting out her classic tune ‘Make It Happen,‘ Mariah Carey slipped and fell in one of her signature high heels in Singapore on September 26, 2010. Though, she rapidly summoned her helpers to remove the shoes and persistent to sing like a true diva. Take a look on the photo/picture and video of Mariah Carey falls on stage in Singapore.

Mariah Carey gave smiles and looked in highest of sprits as she touched down at Singapore’s Changi Airport on September 25, 2010 in the early hours of morning, while there were more than 100 fans waiting for her arrival on the airport to greet the singing sensation. She wore a cropped brown leather jacket and a flowing maternity-style brown dress.

After covering her tummy with a bouquet of flowers in Singapore, Mariah Carey has left fans continuing to wonder if she is pregnant. In front of her belly, she held the flower bouquet in a way that it was not possible to take a peek, while being escorted by muscular security men out of the airport. Having made the trip from Los Angeles, Mariah was ushered to a limousine waiting for her that took her to an exclusive five-star resort ahead of her performance on Sunday.

Mariah Careywith a bouquet of flowers in Singapore on September 25, 2010 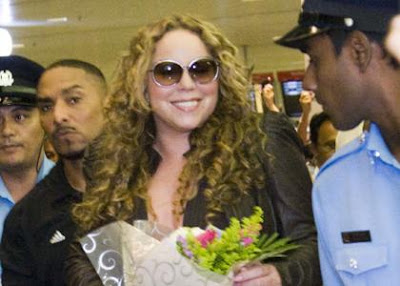 A very pregnant Mariah Carey performed a concert at the 2010 Formula 1 Singtel Singapore Grand Prix, where the legendary diva took a brief tumble on stage for a crowd of more than 100,000. Mimi slipped on stage while performing and elegantly floated to the floor like a true melodramatic diva. Gravely, it looks like the whispers of a zillion butterflies, the wings of a dozen fantasy angels and the rays of a rainbow kindly guided her to the floor. Right there that is serious dramatic theatrics. When she falls, Mimi always visualize that there’s a pink velvet settee just waiting to catch her. When Mimi calls her assistant out to get her heels off so she doesn’t give her Hello Fetus a case of vertigo by free falling again is the best part.

This is a fine example of how a truly diva handles business! Still while being tending to Mariah Carey kept singing live and smiling with the crowd, showing little sign of awkwardness. Expectantly, if she is pregnant, then she doesn’t encounter any problems with the baby.

Video of Mariah Carey Slips and Falls On Stage Singapore GP , 26 sept pregnant plays it off from youtube: