British television personality, Piers Morgan has married with his longtime girlfriend Celia Walden on 24 June 2010 in London. The marriage was held in the Oxfordshire village Swinbrook with a reception in a nearby pub. Colleagues of Morgan, Amanda Holden and Simon Cowell were not invited in his marriage. Celia Walden was arrived wearing a handmade daisy-chain headband and white dress. Just a handful of friends and family were invited at a church in Swinbrook, Oxon by Piers Morgan as he tied the knot with Celia. 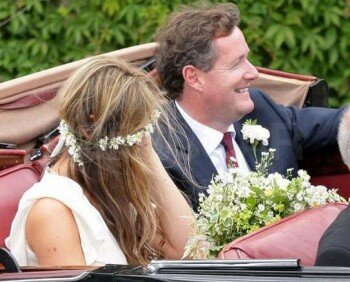 45 years old, Morgan is a judge on “America’s Got Talent and “Britain’s Got Talent” and 33 years old, Celia Walden is a former gossip columnist and journalist. After four years of dating, in December 2009, Piers Morgan proposed to Walden. Holden tweeted on Twitter, “Piers got married today. I could not be happier for my lovely friend.” Morgan has three sons with his first wife Marion Shalloe. In TV, Morgan has carved out a successful career since he was sacked as editor of the Daily Mirror. He has fronted his own travelogue series, Britain’s Got Talent, in which he traveled to Dubai, Monte Carlo and Hollywood. 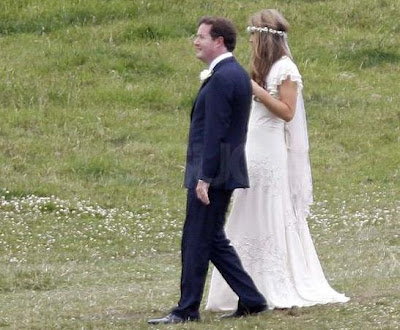 ‘Piers Morgan’s Life Stories’ is a chat show of him, in which Gordon Brown and Dannii Minogue are the guests. The former Conservative MP George Walden is the father of Celia Walden, who is a columnist for The Daily Telegraph. Piers’ co-judge, Simon Cowell was not present at the low-key outdoor ceremony for some reason. Morgan joked he had not asked Simon Cowell to be best man because: “I couldn’t trust him to turn up on time.”