Paul McCartney performed a concert at the White House on Wednesday, 2 June 2010 and won The Library of Congress Gershwin Prize for Popular Song. That song was taped on 2 June and aired on 28 July 2010 at 8:00 p.m. ET on PBS stations nationwide, followed by an encore presentation at 9:30 p.m. The entire show can be watched online due to the video of that song will be available from Thursday, 29 July 2010. 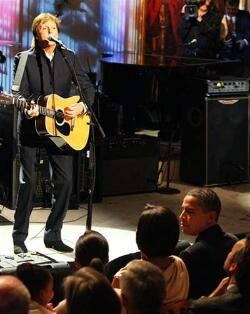 McCartney performed in the East Room of the White House for President Barack Obama and the first family, who sat front row center. Despites of challenges and the suits and ties the concert still rocks out due to a variety of artists tribute their performances such as The Foo Fighters’ Dave Grohl storms through Wings’ “Band on the Run,” Elvis Costello interprets “Penny Lane,” and the Jonas Brothers ignite “Drive My Car.”

Guests such as Stevie Wonder, Elvis Costello, the Jonas Brothers, Jack White and others taking turns playing Beatles classics. Jerry Seinfeld summarized the choice of McCartney for the Gershwin simply as “duh.” Faith Hill, Jack White and last year’s Gershwin honoree Stevie Wonder were other performers, who teams up with McCartney to reprise their 1982 duet, “Ebony and Ivory.”

“McCartney steals the show and perhaps the First Lady’s heart. He dedicates the Beatles’ “Michelle” to Mrs. Obama, who is captured singing along with her husband and children” that is believed by Kaminsky. Kaminsky said, “Everyone in the audience, from the First Lady’s mom to their kids, all knew the Beatles’ songs,” and “It’s a common language that everyone speaks.”

Executive producer Peter Kaminsky said, “Paul fills arenas and stadiums, so to transfer that electricity to the intimate setting of the East Room was a challenge.” Joe Jonas, who ranks the JoBros’ latest trip to the White House as their “most memorable” said, “It was such an incredible experience. Paul has always been an inspiration and hero to us as a band and as songwriters.”

Video of In Performance at the White House from youtube: