Parenthood is a one-hour American comedy-drama television series which telecasts on NBC. It is based on the 1989 film of the same title ‘Parenthood’. Ron Howard and Brian Grazer (Oscar winners for “A Beautiful Mind”) are the executive producers of “Parenthood”. The series is produced by Lawrence Trilling and Jon Ehrlich and Jason Derlatka create the original music of the series. 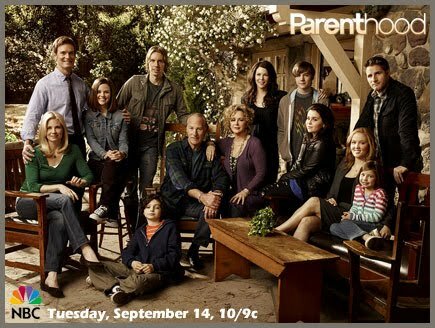 The series focuses around the colorful and imperfect Braverman family: four grown siblings who share the headaches, heartaches, and joy of being parents are described by this contemporary re-imagining of the blockbuster film. Sarah Braverman is financially strapped single mother. She put all her efforts to raise her two inconvenienced kids, Amber and Drew. They live with Sarah’s stubborn father, Zeek (Nelson, “Family Stone,” “Coach”), and strong mother, Camille (Bedelia, “Heart Like A Wheel”), who are privately dealing with their own marital issues.

Meanwhile, Sarah’s sister and complete antithesis, Julia (Erika Christensen, “Traffic”), a successful corporate attorney and motherhood, with loving husband Joel. Her brother Crosby (Shepard, “Baby Mama”) is trying to raise five year old ‘out of wedlock’ son with his ex Jasmine. The oldest of the Braverman sibling is Adam, who with his quietly forceful wife Kristina and teenage daughter Haddie, has to cope with their eccentric son Max. Max is suffering from Asperger’s Syndrome.

Season 2 “Parenthood” telecasted on 14th September, 2010 at 10 p.m. Tuesday on NBC. Last year, whole team was concerns about pilot episode that how this show would ride the many, many emotional ups and down of the large Braverman family. The show had developed into a fine family saga, with fine performances from its large ensemble at the end of its abridged first season. Bonnie Bedelia, for instance, was criminally underused last year as the unsatisfied matriarch, but with 15 regulars, someone is seemingly always on the back burner. But, season 2 “Parenthood” has a big cast. Peter Krause, Maura Tierney, Craig T. Nelson, Dax Shepard, Bonnie Bedelia, Monica Potter, Erika Christensen, Mae Whitman, etc are included in the star-studded cast of NBC’s “Parenthood” TV show.

Executive producer Jason Katims says he has a surefire way to meet the needs of every character. “We’re planning on killing them off one episode at a time,” he joked. “No, it’s a really good question because writing for the show is an embarrassment of riches. It’s the most incredible cast, and every single person in this cast is a wonderful actor. And one of the things I really love coming from “Friday Night Lights” is that sort of, you know, a big ensemble show with a lot of balls in the air and a lot of stories going on. We try to, as much as possible, to challenge ourselves as writers to write toward everyone, and then we also ask patience from the actors. There’s like a natural ebb and flow where there will be a few episodes where you’ll have a big storyline and then have to wait around for a couple of episodes until that happens again.”

The actors told Jason Katims that they are eager to work with characters outside of their own mini-family units for their roles. For example, Erika Christensen has had lots of scenes with her on-screen hubby (Sam Jaeger) and siblings. But she hasn’t shared much screen time with her characters nieces and nephews. “I think we’re all pretty excited at exploring all of the relationships that hadn’t been (explored yet) because we skimmed the surface well in the first season, but there’s a lot of relationships — kind of the aunt/uncle relationships that can go a lot of places. I’m really curious about Max and Julia because Julia is such a control freak, maybe she could learn a little bit from experiencing someone that’s so hard to control, to put it bluntly.”

Co-star Dax Shepherd also wants to spend some time with some of the other young cast members. “Every time I’m watching the show, I’ll see like Mae Whitman in a scene (and) I’ll go, “I want to be in scenes with Mae Whitman. She’s so good. When am I going to have a storyline (with her)? We’re not trying to avoid anyone. We all really want storylines with one other.” 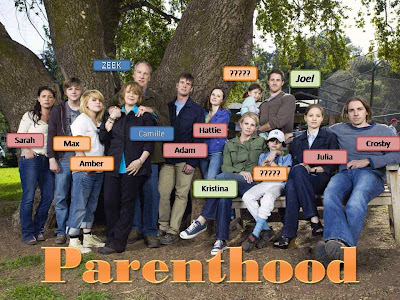 Craig T. Nelson as Zeek Braverman: Zeek Braverman (Craig T. Nelson) is the male-head of the Braverman family. Adam, Sarah, Crosby, and Julia are the children of Zeek Braverman. From a soldier in Vietnam to activist hippie, from aspiring actor to shrewd entrepreneur, nothing has stuck longer than a few years, except of course, being a father.

Peter Krause as Adam Braverman: Adam Braverman, 40, is the father of Max and Haddie. He is the husband of Kristina and the firstborn Braverman child and all of his siblings and parents consult him in times of crisis. He works in a corporate environment, where he competes with cold-blooded colleagues and ambitious underlings. Adam is affable and dependable, but is also high-strung and resolved to have a normal, happy family.

Monica Potter as Kristina Braverman: Kristina Braverman is Adam’s wife. The couple has two children, Haddie Braverman and Max Braverman. She helps everyone who is in trouble. Official material from NBC characterizes her as a “wise and quietly forceful woman who loves her husband and children deeply and with incredible strength.”

Sarah Ramos as Haddie Braverman: Haddie Braverman is Adam and Kristina’s 15-year-old daughter. For years she felt the need to be the quintessential “good girl” to compensate “for all the weirdness” surrounding her brother, but as she gets older, she has begun to assert her independence with her recent interactions with boys and drugs.

Max Murkholder as Max Braverman: Max Braverman is the 8-year-old son of Adam and Kristina, who is diagnosed with Asperger syndrome at the outset of the show. His struggles and triumphs with this syndrome disproportionately affect much of what happens in his family.

Lauren Graham as Sarah Braverman: Sarah Braverman is the second child and oldest daughter. She is 38 years old who have two children (Amber and Drew), and together they move back into her parent’s house in the pilot episode due to money problem. She is divorced from her rocker husband Seth, who appears to have been a very poor father figure to her children. She fails to get a job with a design company because of her lack of a college degree; Sarah once again takes a bartending job.

Mae Whitman as Amber Holt: Amber Holt is Sarah’s 16-year-old daughter at the beginning of the show. She is quickly shown to be disobedient, willful, and unstudious. She resents her move from Fresno, particularly after her mother thwarts her efforts to stay, which she tried to do by moving in with her boyfriend in Fresno. Even so, she has qualities that demonstrate that she has potential to do better.

Miles Heizer as Drew Holt: Drew Holt is Sarah’s 14-year-old son. He is sensitive, and longs for a male role model. Brief glimpses of Seth (Drew’s absentee father) and statements by the character Sarah indicate that Drew has suffered much letdown at the hands of his father, and, as a result, has become morose and withdrawn.

Dax Shepard as Crosby Braverman: Crosby Braverman, 32, is the third oldest of the Braverman brood. He is unmarried guy and has longtime girlfriend, Katie, is pressuring him to settle down and start a family, an idea he is resistant to.

Erika Christensen as Julia Braverman-Graham: Julia Braverman-Graham is the wife of Joel. She is mother of Sydney and the last of the four Braverman children. She’s a lawyer at a top corporate firm while her husband, Joel, supports her ambitions as a stay-at-home dad to their daughter. Julia is sometimes competitive and it is difficult for her to let go and relax.

Sam Jaeger as Joel Graham: Joel Graham is Julia’s husband and Sydney’s father. He is a stay-at-home father, and is popular among the stay-at-home mothers in their social circle at Sydney’s school, a fact which sometimes puts strains on his marriage. He sometimes finds himself starved for adult interaction though he’s 100% committed to the job of raising his daughter.

Savannah Paige Rae as Sydney Graham: Sydney Graham is Julia and Joel’s 5-year-old daughter. Sydney has become a “daddy’s girl,” which causes Julia to put more pressure on herself to carve out significant bonding time with her little girl. She has been recognized as being gifted.