Sameer Soni (Investment banker-turned-actor) has planned to tie knot with actress-turned-jewelry designer, Neelam Kothari, after his existence from ‘Bigg Boss’ house. Both have decided to direct movie after their marriage. The couple spotted together at actor Tusshar Kapoor’s birthday party and started dating in February, 2009. After some time, rumors about their break-up spread, but now, it appears that the stars have sought out their misunderstandings. 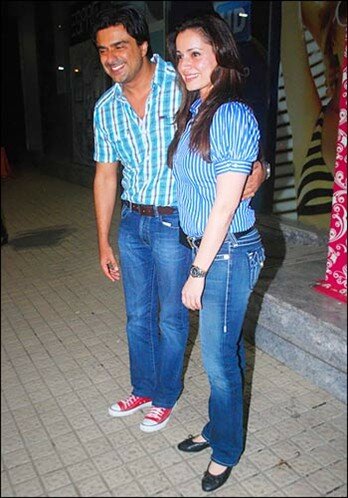 Before entering the fourth season of the reality show, Sameer told IANS, “People have been speculating that I’ll be marrying Neelam in December. But that’s not true. Technically if I am able to stay in Bigg Boss till the end, there’s no question of a wedding within this year. But after Bigg Boss, I do look forward to it“.

Sameer first got married with Rajlaxmi Khanvilkar. After six month of his marriage, both were separated. Right now, Rajlaxmi is married to actor Rahul Roy. Sameer also dated Miss India 1997, late Nafisa Joseph, for almost three years, while Neelam was linked with actor Govinda. B-Town buzz was that fellow actor Govinda was besotted with her during Neelam’s acting days in the mid-’80s and early ’90s. For over five years, she also dated with Bobby Deol. In the year 2000, Neelam got married to London-based Rishi Sethia, son of industrialist Nirmal Sethia. After some time, both separated and the actress was never connected with anyone till Sameer Soni appeared on the scenario.

Sameer started his acting career with Ashok Gupta’s ‘A Mouthful of Sky’ on Doordarshan in 1996. He is best remembered as Purab from Jassi Jaissi Koi Nahi. He was also part of Raj Kumar Santoshi’s ‘China Gate’. Sameer is also part of movies like ‘Basti’, ‘Lajja’, ‘Kaha Ho Tum’, ‘Baghban’ and a cross over movie like ‘Dance Like a Man’. Sameer acted in Madhur Bhandarkar’s Fashion movie as a latest tendency designer. For his portrayal of a controller, he was commended in K Johar’s movie, I Hate Love Story.

As per the sources, “The couple took long to make it public as they’ve both had their share of relationships and wanted to be sure about each other before bringing the spotlight on their relationship.” Sameer said, “Neelam and I are good friends. Tusshar Kapoor invited us for his party, so we went along.” He also said that we both met at one of Ekta Kapoor’s parties. “We knew a lot of common pals so when we got introduced we, too, became good friends,” says Sameer. When someone asked if Sameer was special to her, Neelam says, “It is too early to say anything now. But I do enjoy his company a lot.”

Sameer said that he is going to implement his function of I Hate Luv Story seriously in his life. Sameer Soni said, “This is my first truth show. I had been suggested diverse promenade displays, etc in the past and was even inquired to manage “Bigg Boss”; in all past seasons. But frankly, I wasn’t prepared to be judged so in an open way by the public.”

When someone asked about Neelam’s reaction when he gave a nod to Bigg Boss 4, then he quipped, “Oh well, she was very supportive but kept giving me the jitters by making me feel as though I am going for the Kargil War! She was making it tougher for me…but I was cool and I’ll just think I’m on a vacation.”

The actor has joined the reality show to improve his professional persona. The biggest challenge that this theatrical felt is the show’s concept. “I have been living alone for the past 15 years. I have had all the space to myself. So how I get along with the people and share my space will be a big challenge.” Soni added, “Professionally, I’m on quite a roll. My two recent films have been successful and I am very satisfied. This show is for my personal growth.”