TV Show, Outsourced telecasted on Thursday night, 23 September 2010, on NBC at 9:30 EST. Outsourced is the half-hour comedy show. Ben Rappaport, Diedrich Bader, Rebecca Hazlewood and Anisha Nagarajan are stars of this show. The character Charlie is the face of the ugly, ignorant American, the opposite of the naive but evolving Todd. “Outsourced” was the name of a 2006 film, which was made in Canada that an audience favorite on the Indies circuit. Ken Kwapis is the executive producer of NBC’s “Outsourced”. 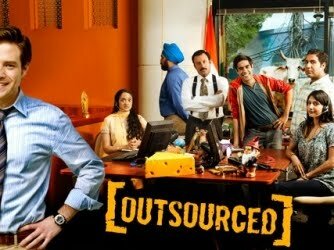 “Outsourced” is the “Indian” TV show, made in America, by Americans and some British Indians for a global audience. The beauty of the show is to show that the Indian office is identical to the U.S. office. The office romance and office gossip remain the same while the context may change, peanut butter and jelly may become dal and roti. “Outsourced” has been gotten a plum spot on prime time by NBC after “Community,” “30 Rock” and “The Office.” Paradoxically, all three of those shows have Indians in important roles.

In “Outsourced” show, a young professional whose name is Todd (Ben Rappaport), is followed to an Mumbai call center, when his company, a manufacturer of American novelty gifts, downsizes and shifts its operation to India. Todd has to school a ragtag group of employees on the nuances of American pop culture while they try to sell whoopee cushion and fake vomit. He has already dealing with the culture shock of a move abroad.

“Outsourced” can muster for a few shots of Los Angeles’ San Fernando Valley at odd angles. 90 percent of the series takes place in office that could easily pass for the Buffalo branch of Dunder Mifflin. The show is not resided on the crass attempts at comedy. According to Alessandra Stanley, “The fact that it’s neither embarrassing nor deeply offensive—once it gets rolling, the show is actually quite charming—is a credit to the cast and the writers.”

“Outsourced” is an annoying blister of a television series due to it’s the laziness with every element. It appears that the show is set to be outsourced to the garbage bin. Due to its extremely poor jokes to the horrible job of simulating Mumbai and a call centre there, the show falls flat and fails in many areas. Lack of creativity, intelligence, wit or humor is shown in the jokes. Indian food is gross and makes people have to go to the bathroom! Misogynist Eastern cultures produce timid women! They’re the same jokes that the ignorant have been saying for years.

“Well, it’s not about that,” Borden said. “Outsourcing began long before the recession. And nowadays, outsourcing is about white collar jobs. Doctors, even. If people watch this show, they’re going to see it’s not about outsourcing. It’s about getting into another culture. And then you’ll see that the people here (in India) become a surrogate family for Todd.”

Video of ‘Outsourced’ Exports the Funny to NBC from youtube: