Superstar Mahesh Babu’s telugu movie Khaleja has been released with several expectations. Khaleja review is the much anticipated word and reasonably too. Below is the movie’s review. 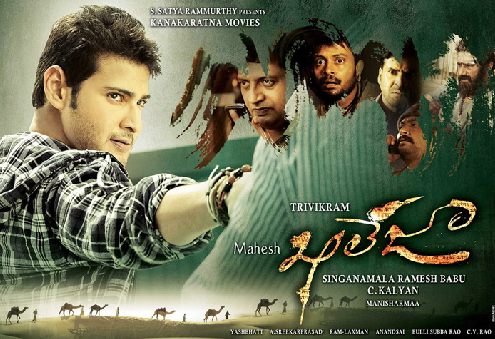 GK (Prakash Raj) is a business tycoon who plans to create a plastic factory in Paali village. GK finds that the land of Paali is having Iridium (worth more than gold) through a researcher. So GK plans to get his son’s marriage with Tanikella Bharani’s daughter Subhashini (Anushka) so that their business can grow unlawfully.

Trivikram Srinivas, writer turned Director is known for his candy floss and humor quotient, but reveals a different fairy-tale in the form of an action entertainer Khaleja.

In a completely different dimension, Mahesh Babu’s characterization is being shown. Trivikram comes up with an attractive script which is perfect on Mahesh Babu.

Earlier, this type of unique character in his career has not been made by Mahesh Babu. In this narration, he is able to take the responsibility and carries the feel of his character very well.

Plot and conflict point are reasonably strong. The story took off was not as expected in the screenplay and pace. But the strength in the conflict point was not badly affected since the lead protagonist being Mahesh Babu. Besides this, his action sequences were also well made and he does with Bachchan-like naturalness.

This is not a film that should be made with a whopping budget of 40 crores and short in 3 years. Once again, Trivikram carries the same humor dimensions with Sunil, Ali and Brahmanandam. But the big bang is not diluted by all the giddiness.

Mahesh Babu is attractive and graceful. By his role, he again is made a teen heartthrob by his stylish looks and trendy costumes. He mesmerizes with this on-screen presence true to his image of Prince Charming. His body language is very energetic and his action episodes are great as well.

Anushka is attractive as a demure damsel. The role is fit with her essential impishness. But she has to improve her expressions in emotional scenes. Rao Ramesh has done well as a foreteller – mostly same as he did in Magadheera. Shafi also did well as Rao Ramesh’s disciple. Prakash Raj and Thannikela Bharani are adequate.