Madrasapattinam is a period drama-oriented Tamil Movie. Madharasapattinam Movie hits the theaters on Friday, 9 July 2010. Arya and Annette Georgiou, Amy Jackson are in lead roles in this movie. Story of Madrasapattinam is setup in pre-independence India in the Madras, which was under British Rule. Vijay A L. is the director, Kalpathi S Aghoram is the Producer, and G V Prakash Kumar is Music Director of Madrasapattinam movie. Director Vijay had made the first attempt in different cinema, which has appreciated. Over the Tamil Cinema, there are some changes happening as there are more experimental is that romantic films are being made on different lines. Madharasapattinam is a different cinema with some good performances of actors and it is set in backdrops of before independence period. At duration of 2.40hrs. screenplay is more dragging.

The film starts off in the present day in London with old age Amy on her death bed wanting her family members to visit Chennai. Amy 85 year old lady has a blood clot in her brain and has only a 50-50 chance of surviving the operation, has a picture of parithi (arya) which is 60 years old and she wants to go to madarasapattinam with just one week left for her operation. In her search for parithi in Madarasapattinam, which is now Chennai, she is accompanied by her grand-daughter. As the journey starts, Amy’s flashback too commences thereby leasing the secret behind her visit to India, especially Chennai. Then the story moves back to the pre independence era in 1945. 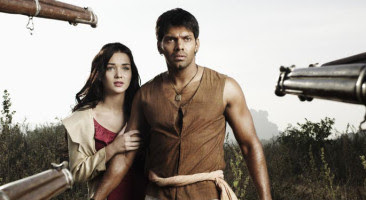 Amy (Amy Jackson), the daughter of the governor comes to Madras. Parithi is a local tamil boy who is a dobhi by profession and also a kushthi (ancient fight form) fighter. They live on the banks of kuvam river where they also work. She see’s Parithi on her very first day in Madras and also they meet in a couple of other occasions and she starts liking him. In the meanwhile the governor decides to change the dobhi’s living area into a golf course and the work place of dobhi is destroyed. By this time against her wish, Amy is engaged to the police commissioner, Robert Ellis. Then slowly as the movie progresses Amy and Parithi fall in love but by the India is given Independence. Amy’s father wants to go back to England but Amy wants to stay back with Parithi. Towards the climax, there awaits the most surprising, eyes soaking sequence as the audiences would be puzzled will Amy meet her old Indian boyfriend.

A good performance has been given by Arya with his body language and acting skills. He has done all the action parts well. The British girl Amy Jackson is so beautiful as she will transfix you and has performed well. At a lot of places, Cochin Hanifa as nambji makes people laugh. His loss is really big loss to the south Indian film industry. Nasser, m.s.basker, balasingh, alex o nell, jack james have all played important roles.

The camera work by Nirav Shah and art work by Selvakumar is the major plus of this film. Musical score by G.V. Prakash is passable and the song Vaama Duraiyamma is good. The other actors like Poi Solla Porom fame Omar and late actor Haneefa along with Nasser have done justice to their roles. The first half is very lengthy and audience may be more restless as the major portions are in English dialogues. The pace starts at 20 mins after second half. Madarasapattinam will be a landmark film in the careers of the cast and crew of the film. On the whole this is a must watch film. 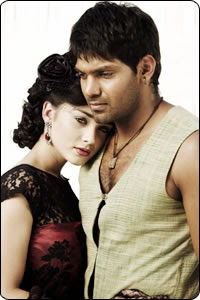 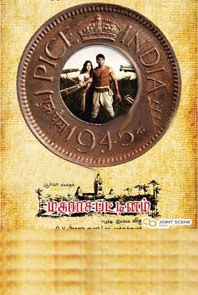 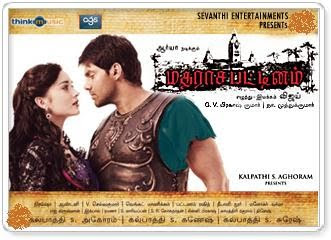