Laurence Fishburne became famous due to his role in movie The Matrix. The actor may be in trouble but he has not done for anything. If the news is true, then his 19 year old daughter is seeing a man.

Several websites have issued the images of the couple online. But, it is yet to be known if they are true or worked up. When the photographers who were present there tried taking their snaps, but daughter of the actor was trying to hide her face through her handbag. As of now, the actor has not said anything on this topic. 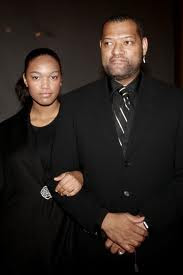 Perhaps, she did a right thing by fleeing the scene as some more images could have shattered her image and the status of her famous daddy.

The gossip about Montana went spread over the web across the planet. Fishburne must be more worried about the well being of Montana rather than the circulating stories about her daughter. At present, Fishburne is planning for his one man show named Thurgood which is programmed to occur on the 8th August, 2010, at the Geffen Playhouse. The show will describe him as Thurgood Marshal as an amateur lawyer who works for civil rights against the insidious and subtle disease of the society famous as racism.