Wardrobe Malfunction is the dangerous for actress at any award. Lots of celebrity have suffered Wardrobe Malfunction at functions. Recently, 32 year old the former Miss Universe, Lara Dutta wearing a low cut dress at gold IIFA held in Colombo recently had a wardrobe malfunction. 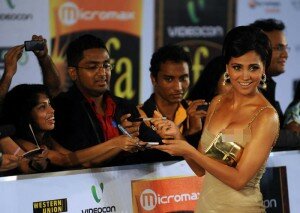 According to several news report Lara Dutta was present on stage for the launch of a musical reality show of which she is a judge. She was addressing the gathering when all of a sudden the strap of her dress snapped. But this cool and composed guy (Lara) did not let this affect her. All her experiences of walking the ramp came to her rescue. She quickly held on to the snapped strap and went backstage to fix it. Thus finally Lara’s presence of mind proved that no such malfunction can rattle her.

A source from the sets revealed, “Lara Dutta was slightly uncomfortable when photographers asked for her pictures. She rushed back stage to fix her strap and then after a minute or two she came back and posed for the shutterbugs.“