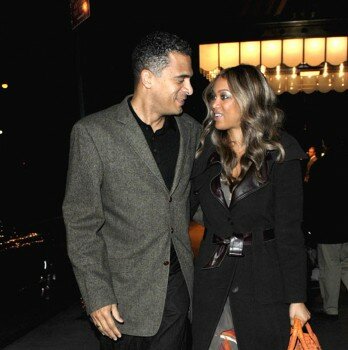 When Tyra Banks was spotted wearing a gold ring on her left hand at the Daytime Emmy Awards, rumors spread about Tyra Banks that s she may be engaged to her businessman boyfriend, John Utendahl. But US Magazine has reported that Tyra’s replied about this rumor, “It’s not true. Tyra is not engaged.”

Tyra Banks was born in Inglewood, California, USA. She is the daughter of Carolyn who is the fashion manager and NASA photographer, and Donald Banks, a computer consultant. American media personality Tyra Bank is an, actress, talkshow host, occasional singer, former model and businesswoman

John Utendahl was born in Queens. He got his Bachelor’s degree from Long Island University and MBA from Columbia University. John Utendahl is the chairman of Utendahl Capital Management LP, the largest African-American owned investment bank in the United States of America. Previously Utendahl was married with Phyllis Hollis, who is the mortgage bond specialist on Wall Street. The dating of John and Tyra began in July 2007. A show named as ‘True Beauty’ that is produced by Tyra and Ashton Kutcher.

On Sep 25, the premier of ‘Wall Street: Money Never Sleeps’ was attended by the stars of the film namely- Michael Douglas and Shia Labeouf. The Premiere of the film arranged at New York proved to be a star studded event. Major media agencies also attended premier. Tyra Banks walked in at the Red Carpet in this event. She was not alone; she brought her boyfriend at the venue. Couple was spotted hand in hand in loving hold at the premiere. Hand in hand posture of this Couple gave many to coin the phrase Banker with Banks on Wall Street like “Banks with Banks on Wall Street.”

Tyra Banks and John Utendahl on Holla Back TV video from youtube: