On 5th July, 2010 “The Bachelor” Jake Pavelka and his former fiance Vienna Girardi was talked about their break-up in an interview aired on ABC during “The Bachelorette“. According to TMZ, Jake lost his temper — and cocked his arm and made a fist in Vienna’s direction. In March, the couple told, “Good Morning America” their relationship was “amazing” and “incredible”. Pavelka said it’s “awesome“. Both said it’s possible to find love on a reality show. The proof is “right here,” Girardi said. 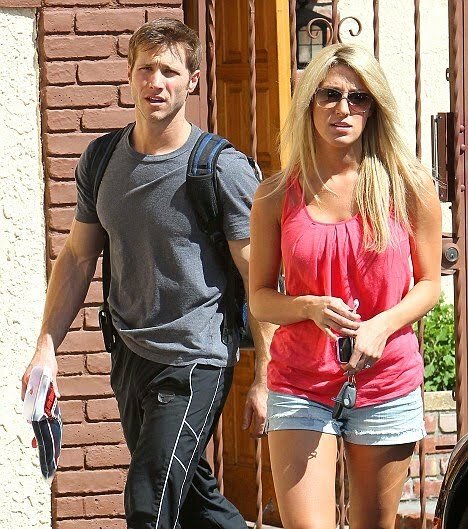 The scene from the interview of Jake and Vienna was the total opposite of the couple the night she received the last rose on the Bachelor. All those hugs and kisses have now turned into screaming, rage, anger, and clinched fists. Vienna had recently talked about Jake’s lack of sex drive and said they had not had sexual relations in four months. She also called him a “reality show whore” saying that the prospect of fame is the only reason he went on the show, The Bachelor, in the first place.

A source close to Vienna claims Jake “has a really bad hidden temper. He snaps all the time, it was just the first time he did it in front of people.” The interview then reportedly ended abruptly with Jake walking off. Another “source” however disputes the claims, telling TMZ Vienna was interrupting Jake constantly during the taping … “Chris Harrison had to tell her over and over again to let him talk.”

With Jake by her side, Vienna explains to host Chris Harrison, “The world was going to want to know what happened”, “I know Jake and I knew that as soon as we broke up he was going to run to a media outlet and tell his side of the story. I wanted to make sure I had a voice also. I haven’t had a voice this entire time.”

Vienna, who was the controversial winner of Jake’s season of The Bachelor, also addressed the negative media coverage and criticism she has faced since she first appeared on the show. She says, “I’ve let everyone say what they wanted to say about me and their thoughts about me and I wasn’t going to let it happen again”, “I want people to know that I did try in this relationship. And I stayed with him because I thought it would be different. And I loved him.”

The Jake and Vienna interview: 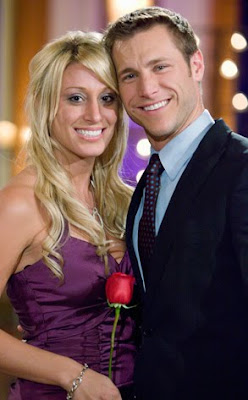 I will admit I felt a certain, perhaps mean-spirited, anticipation at the prospect of seeing Vienna Girardi, whom I couldn’t stand on last season’s Bachelor, face off against ex-fiance Jake Pavelka. But what happened Monday night was no fun at all.

Essentially, viewers got to watch an extended bitter argument between the two that culminated in Vienna running off the set and sobbing her eyes out behind a closed door. And rather than show compassion for his erstwhile bride-to-be, a dry-eyed Jake told host Chris Harrison the sight was embarrassing.

Harrison seemed to take a dim view of Vienna selling her story to Star magazine. Her reasoning was that she wanted to speak up for herself and if she didn’t go to the tabs first, Jake would because he’s “a fame whore.” Of course, Jake, who looked almost white hot with anger throughout must of the interview, took his side of the story to Us Weekly, with his allegations that Vienna was cheating on him.

Vienna denied again Monday night that she had cheated with Greek star Gregory Michael, saying that she ran into Gregory at an event, he invited her and a group of other people out the next day and he showed up with three other women. When Jake countered that she had another man at their apartment, she said it was a gay man named Todd who brought her a dress for a charity event. “You talked to him on the phone,” she said.

At least Vienna was consistent in what she told both Star and Harrison was wrong with the relationship, including a lack of physical affection from Jake, him putting his acting career ahead of their life together and moving her to L.A. away from her support system.

“You stopped being intimate and kissing and everything the second month we were together,” Vienna told him. “How does everything go away?” “Just give me a minute to answer. What guy in America would ever want to be intimate with a woman that undermines, emasculates … and doesn’t respect …” retorted Jake. “I would like examples,” answered Vienna. “You always say I undermine you every day.”

Those examples, while trivial, seemed to point to a man who doesn’t like his sense of authority to be challenged in any way: petulantly throwing a GPS into the back seat of the car because Vienna decided to use it rather than trust his directions, and getting upset when she decided to retake measurements he had already taken to determine where furniture should be placed in a bedroom.

Vienna claimed she had tried to break up with Jake twice, giving him back his engagement ring, but he had promised to change each time. But Jake characterized the incidents as Vienna throwing little temper tantrums. “She would test me, take the ring off and go sit and sulk in the bathroom, waiting for me to go and chase her. It was a game.”

Jake didn’t deny Vienna’s allegations of lack of intimacy. “You know, to me, there’s more in a relationship than just sex and intimacy,” he said. “Those are just two little things.”

“Or talking or getting to know someone’s family. Those are part of a relationship, correct?” said Vienna. “He never talked to me. He never tried to get to know me. He never got to know my family. He was always, like, mean to me and treated me like I was a child. And he brought me to L.A. and stuck me in an apartment,” she complained.

“Chris, I just want to say something right there. She’s asking why there’s no intimacy in our relationship. This is it. She breaks me down. She undermines me. She’s mean. She’s always right. I never do anything right and this is it right here.”

Vienna said Jake would never find a woman “unless there’s a woman out there who literally has no respect for herself and just wants a man to control her.” “I’m sure, Chris, I don’t want a selfish woman,” retorted Jake.

And on it went, he said, she said ad nauseum, until Chris asked whether Vienna had anything she wanted to apologize to Jake for. She pondered, then looked right at Jake and said, “I am sorry that I went about it the way I did, but I know you … and I knew you would do it if I didn’t.” “You don’t know me and I wouldn’t have done it…” he said.

“If I don’t know you...” began Vienna. Looking very angry, Jake barked, “Please stop interrupting me,” while raising his hand in a chopping motion and bringing it down against his knee.
“The thing is I would have never done this to somebody that I love. When I got down on one knee…” he began as Vienna cried loudly and made another comment.

When Jake complained, “Again I got interrupted,” Vienna jumped up, declared, “I’m done with this” and marched off into the mansion where crew members took her into a room but left her mic on so she could be heard sobbing behind the closed door.

It was ugly and Jake came off looking like a cold, controlling bully, certainly not the catch he was made out to be on The Bachelor. To be sure, Vienna, eight year Jake’s junior, seemed spoiled and headstrong on the original show. Monday night, she seemed genuinely heartbroken.

It’s probably a good thing current Bachelorette Ali Fedotowsky never saw this interview while she was trying to choose a mate of her own. I suspect she would have run screaming for the exit.