Isaiah Mustafa’s Old Spice Viral Video hits internet from the past many hours. An outstanding Old Spice ad featuring an intensely manly Isaiah Mustafa have received such positive response that Old Spice has begun producing brief video responses to comments left on the ads on their YouTube channel. The official Old Spice replies come in the form of brief video clips of Mustafa replying to the commenter with as much wit and testosterone as can be shoved into a few seconds air time.

The Old Spice Guy, played by Isaiah Mustafa, became an overnight sensation when the classic deodorant company’s ad campaign debuted during the Superbowl in February. In the commercials, Mustafa takes on the role of “The Man Your Man Could Smell Like,” a suave, shirtless, lothario who peddles body wash in ridiculous settings, even atop a white stallion.

On Tuesday morning, Old Spice’s official Twitter page posted a cryptic message: “Today could be just like the other 364 days you log into twitter,” it read. “Or maybe the Old Spice man shows up.”

In a post titled “The Old Spice Man Responds To The Internet”, Mustafa’s alter-ego announced the PR stunt, writing, “For one day only I’ll be fielding questions, comments and anything else you can think of.”

In one video, Mustafa responds to Reddit user robotjox, who asks:

‘If you could meet one great historical figure then arm-wrestles them while singing opera, who would it be?’ That’s easy. Genghis Khan, because he died like 5,000 years before opera was even invented. And when he hears the soul-enchanting tones of Wagner streaming out of my phonics funnel straight into his face, his quivering arm will become overcome with emotion and literally peel off his body like a leaf from a freshly steamed artichoke that I will dip in melted butter and sage and feed to the Mongolian wolves.” 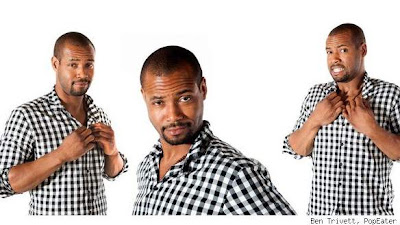 The announcement instructed fans to post their questions online or send them to Twitter, where Mustafa would respond to the comments deemed most popular. “Then,” he told to his followers, “look for my incredibly manly and witty and amazing responses.”

Then Mustafa spent the day wearing his trademark towel and standing in a bathroom, fielding questions like “What would happen if you were in a room with a pirate and a ninja?” and “If you went back in time, how do you think a dinosaur would react to the manly scent of Old Spice?”

“Can the Old Spice guy do ads for ALL the world’s products?!” tweeted actress Justine Bateman, echoing the sentiments of enraptured fans everywhere.

Old Spice Guy seemed to hit it off with Alyssa Milano in particular, posting no less than three videos to the actress after she tweeted that she had a crush on him. “Ahhhh!!! I’m blushing!!!” she responded to the last video, in which Mustafa brandished a giant bouquet of flowers and pantomimed writing her a love note with a feather pen.

He even granted one fan’s request to propose to his girlfriend, whipping out a diamond ring and two elaborate candelabras to pop the question for a user named jsbeals. “Your love has blossomed from a seed into a fully grown love plant, and now it’s time to fertilize that plant,” he says in the clip. “Will you make jsbeals the happiest man in the world and marry him in real life?”

Mustafa, a former NFL player, once told People Magazine that his character’s over-the-top voice was unplanned, and that he came up with the idea the day before his audition. The gimmick proved a huge success, quickly landing him on both Oprah Winfrey’s and Ellen DeGeneres’ couches, and leading to a talent deal with NBC.