Dennis Hopper, 74 years old Hollywood actor has died after a long bout with prostate cancer, according to reports. Family friend Alex Hitz said, on Saturday Hopper died at his home in the Los Angeles beach community of Venice, surrounded by family and friends. Hopper was diagnosed with prostate cancer in October 2009.

Dennis Hopper was the high-flying Hollywood wild man whose memorable and erratic career included an early turn in “Rebel Without a Cause,” an improbable smash with “Easy Rider” and a classic character role in “Blue Velvet”. 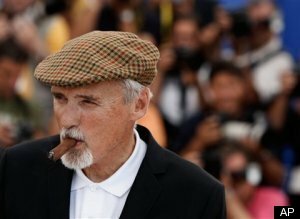 The success of “Easy Rider,” and the spectacular failure of his next film, “The Last Movie,” fit the pattern for the talented but sometimes uncontrollable actor-director, who also had parts in such favorites as “Apocalypse Now” and “Hoosiers.” He was a two-time Academy Award nominee, and in March 2010, was honored with a star on Hollywood’s Walk of Fame.

After a promising start that included roles in two James Dean films, Hopper’s acting career had languished as he developed a reputation for throwing tantrums and abusing alcohol and drugs. On the set of “True Grit,” Hopper so angered John Wayne that the star reportedly chased Hopper with a loaded gun.

He married five times and led a dramatic life right to the end. In January 2010, Hopper filed to end his 14-year marriage to Victoria Hopper, who stated in court filings that the actor was seeking to cut her out of her inheritance, a claim Hopper denied.

Wed five times, his final marriage, to Victoria Duffy, turned into an acrimonious split in 2010 when she accused his family of trying to cut her out of his life.

In April a judge ruled that Duffy, who shared a young daughter with Hopper, could remain at the marital home.

It was during the court hearings that it was revealed Hopper was terminally ill with prostate cancer, following his diagnosis last year.