Grey’s Anatomy is an American medical drama television series which comes with Season 7. The premiere episode of Grey’s Anatomy titled “With You I’m Born Again” will be telecasted on September 23, 2010 at 9pm on ABC. This series focuses on the lives of interns, residents and their mentors in the fictional Seattle Grace-Mercy West Hospital in Seattle, Washington. 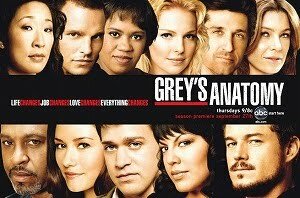 On the first episode of the season 7, the wedding of Owen and Cristina will be shown. Dr. Jackson Avery (Jesse Williams) and Dr. April Kepner (Sarah Drew) have been promoted to series regulars. For at least two episodes in the seventh season, James Tupper cast as a Dr. Andrew Perkins trauma counselor who is brought in to help in the recovery and to assess each doctor’s readiness to return to work. It is exposed that in this season, April Kepner and Jackson Avery will be moving in with Meredith and Derek. A spontaneous decision is made by Derek to resign as Chief and rushes back into surgery, taking everything a little too fast, and Cristina buries herself in her wedding planning.

The newest series of Private Practice regular Caterina Scorsone who plays Amelia Shepherd will appear in the third episode of this season. In end of season 6 it has been confirmed that Katherine Heigl left the show, her character Isobel Stevens will have a proper closure to her relationship with Alex Karev. This does not necessarily mean that Heigl will be back in season 7. Shonda Rhimes says that she “doesn’t know” of the possibility of Heigl’s return. The hospital staff is trying to deal with physical and emotional trauma in the wake of the deadly rampage of a vengeful gunman in the season 7 premiere.

Besides this, Rachael Taylor, an Australian model/actress has played a guest starring role. Her character is still in the planning stages since she won’t be on until mid-season, but she’ll most likely play a doctor, according to Michael Ausiello. Taylor is well-known for her role in Transformers as Maggie. She was also in the 2008 horror movie Shutter with Joshua Jackson.

Season 7 Episode 1
Title: With You I’m Born Again
Original air date: September 23, 2010
Synopsis: At Seattle Grace-Mercy West, The doctors find themselves in frenzy. Derek is in prison for speeding. Cristina and Owen will marry and others are trying to deal with the recent blood bath. Meredith still hasn’t confessed about the miscarriage. Dr. Andrew Perkins reaches and helps the doctors cope on the recent traumatic events.