The first teaser trailer has been unveiled by Magnolia for Gareth Edwards’ Monsters. It is the super low-budget sci-fi alien indie film that we fell in love with at Cannes. First Official Teaser hits the web about indie film that you’ve all been waiting to see, but make sure you know going in that this is actually a more intimate film about the relationship between these two people.

It is not an epic sci-fi flick, there’s not many fights with the aliens in it, but it’s still a brilliant, fantastic film that a lot of people will go to watch this film later this year (starting October 29th!), as many people think filmmaker Gareth Edwards accomplished some amazing things.

The Director of Monsters is Gareth Edwards who sensationally debut road movie with an emotion, an engaging romantic drama, a scary creature feature, a provocative post-Apocalyptic parable and an all-round remarkable achievement. All the visual affects is on his laptop which he dreamed up the affecting and compelling story and created. The amazing result gives his potent sci-fi fable an impressive epic look for a micro-percent of the usual Hollywood blockbuster budget. MONSTERS is involving and satisfying as it is surprising and moving, something utterly unique, original and awe-inspiring.

In the below given picture, Six years ago a Nasa probe returning to Earth with samples of an alien lifeform crashes over Central America. Afterward, a new lifeforms begin to come into sight and half of Mexico is quarantined. In this movie a journalist shepherd an American tourist through the infected zone to the safety of the U.S. border. As a road movie, project was filmed which is travelling through Guatemala, Mexico and the U.S. with locals involved with cast members Scoot McNairy (In Search Of A Midnight Kiss) and Whitney Able (All The Boys Love Mandy Lane). 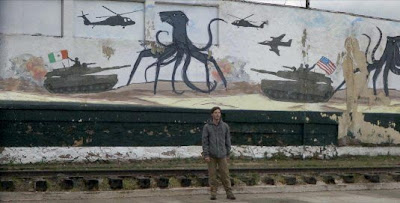 Film4 FrightFest which runs from August 26 to August 30 in London’s Leicester Square, is the place where MONSTERS will also be shown in the United Kingdom.