An American actress and star of the “Desperate Housewives”,  Eva Longoria Parker hosted the MTV Europe Awards 2010 event with sporting herself in Spanish Ham Dress and trumped Lady Gaga’s infamous meat dress. Eva Longoria impressed all audience. The MTV Music Awards‎ 2010 was held on Sunday, November 7th at The Magic Box in Madrid. 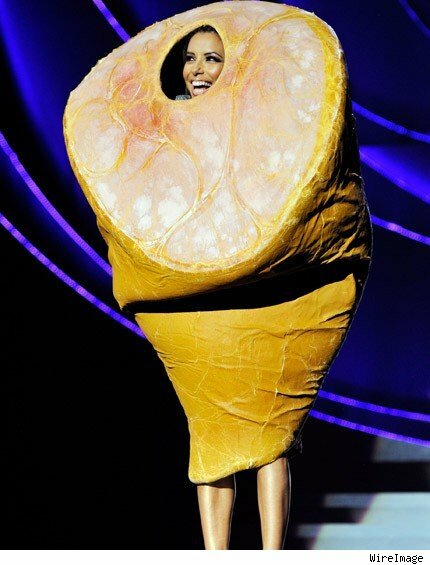 The charming 35-year-old, Eva Longoria said prior to the ceremony that she planned to pull off some way-out outfits and that was true to her word.

The event presenter charmed the audience with his unique humor and wit that took together a several international artists.

Eva emerged on the stage in a layered satin gown after switching between half a dozen outfits from magenta slit-front tuxedo jacket to black, shoulderless mini dress. However, Katy Perry, US singer was awarded for best video at the event for “California Gurls” who dressed Longoria’s gown and shimmering black bustier and mini-shorts beneath.

As Eva Longoria waddled onstage in a full-scale honor to the “meat dress” which was created completely raw steak and on other side Lady Gaga dressed to the September MTV music awards in the United States.

Longoria said that the “Jamon Iberico” or Spanish Ham dress, shaped like a fleshy leg of cured ham with only her head poking out of its centre which one of ten diverse outfits that actress wore before and during the show.

Longoria cleverly saying, “Lady Gaga couldn’t be here tonight but she left this dress backstage. Who knew Spanish ham was one of my colours?”

The US singer, Katy Perry was not present for the MTV awards ceremony even she won three prizes for female artist of the year with Canadian teen heartthrob Justin Bieber taking best male artist gong.

Lady Gaga also won the best pop artist award and top song prize for “Bad Romance” at the music channel’s European awards ceremony who already won the prizes at the US version of the awards in September.

With a Victoria Beckham-designed dress, Eva came in to view on the red carpet but throughout the way of the evening, she came in to sport a number of disclosing designs.