Today, on 31st July, 2010 Enthiran: The Robot movie’s music is going to launch with the composition of A.R.Rehman at the Putrajaya International Convention Centre in Kuala Lumpur, Malaysia. The composition of the songs is already set to listen to techno beats and snazzy rhythms of A.R. Rahman. Rajinikanth and Aishwarya Rai Bachchan is the main star of Enthiran: The Robot movie. 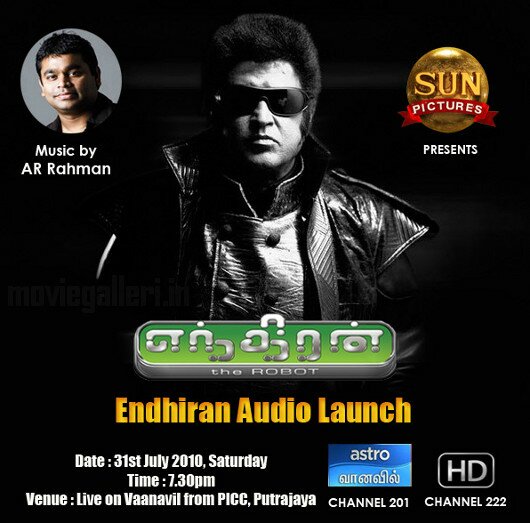 Endhiran (means Robot) is a forthcoming Tamil science fiction film which is directed by S. Shankar. The film is made on the highest ever film budget in Indian Cinema. The producer of this movie is Kalanidhi Maran and music is given by the Academy Award-winning film composer A. R. Rahman. It is high-budgeted movie and expected to be a multiple-record breaker. Currently, the film is undergoing post-production work after meticulous filming and production for over two years.

Along with its dubbed versions: Robot in Hindi and Yanthram in Telugu, the movie is probable to be released on 3rd September, 2010 worldwide. The audio of the movie have acquired the copy rights for a hopping amount of 7 crore. Endhiran will releases under the production of Sun Pictures. The music of the movie is released under the Think Music label. According to sources, a message has been sent by Chief Minister N Karunanidhi for Endhiran and is going to be read out at the prestigious ceremony.

Celebrities like Vairamuthu, Krish and Sangeetha, Ramya Krishnan, Editor Anthony, members of AR Rahman Family, producer AM Rathnam and others are landed in KL for the music ceremony of the movie, Endhiran: The Robot. The guests and the staff are being stayed in Hotel Equatorial in KL. The function is celebrated in a very grand manner and expected to be graced with lots of VVIPs.

The director of the movie, Shankar is impressed with the songs that Rahman has composed for the film. He has posted, on his blog, his opinions about the songs on July 12- “A good news… Yesterday morning Rahman gave the Tamil songs final mix master to us… it is amazing…rocking, sounding as big & grand as the budget of the movie. The first song clearly indicates that our A.R. Rahman is an Oscar winner. I hope once again our combination lives up to your expectation levels. And we are planning to release the audio at the end of this month.” 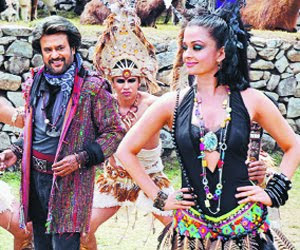 Song: Puthiya Manidha: The singers of ‘Pudhiya Manidha’ song are S.P. Balasubrahmanyam, A.R. Rahman and his daughter Khatija Rahman. In keeping with the futuristic theme of the movie’ the opening notes are very techno. The song goes on to sing extol of the Robot and its sublimity. SPB’s vocals overpower the others’ when the pace gradually picks up. A slow strong chanting ‘Pudhiya Manidha Boomiku Va’ follows a robotic rendering of the first verse.
Singers: S. P. Balasubramaniam, A R Rahman, Khatija Rahman
Lyrics: Vairamuthu

Song: Kadal Anukkal:‘Kadhal Anukkal’ is a poetic love song which was sang by Vijay Prakash and Shreya Ghoshal. The honeyed opening guitar strumming is simple but beautiful. The song contains pacey beats in the background and a gentle melody in the foreground with a typical ARR melody of the 2000s. In the first music interval note of bagpipes can be sounded which has a soothing feel to it and in the second half, the techno beats surface can sounds.
Singers: Vijay Prakash, Shreya Ghoshal
Lyrics: Vairamuthu

Song:Chitti Dance Showcase: ‘Chitti Dance Showcase’ has very techno, speedy theme song. It sung into heavy western beating, which is very interesting piece, repeated a few times in the composition. In starting the first few lines of the song was in English then they rapidly converted into quick-paced classic notes. The song has a heavy dose of electric drums; when the drums fall silent, they are replaced by a serene violin orchestra with a divine harmony.
Singers: Pradeep Vijay, Pravin Mani, Yogi B
Additional Arrangements and Programming: Pravin Mani

Song:Arima Arima: The singers of ‘Arima Arima’ song are Hariharan and Sadhana Sargam. The song starts with royal rhythm of drums like it’s marking the entry of an Emperor, in this case, Endhiran. There is a touch of pain in the voice of Sadhana Sargam while the chorus chants his praises, calling him even the Silicon Singam. This majestic composition has a shade of melancholy, bringing out the contrast in the psychological mindsets of the characters.
Singers: Hariharan, Sadhana Sargam
Additional Vocals: Benny Dayal, Naresh Iyer
Lyrics: Vairamuthu

Song: Kilimanjaro: Kilimanjaro song is sung by Javed Ali and Chinmayi which is quite a fast number for its background beats. The lyrics of the song is written by P. Vijay.
Singers: Javed Ali, Chinmayi
Lyrics: P. Vijay
Additional Vocal Arrangements: Clinton Cerejo