The annual ceremony was presented by the Academy of Television Arts & Sciences. The nominations list of the 2010 Emmy Awards were full of newcomers including the new shows like ‘Glee‘ and ‘Modern Family’ that shows up with multiple nominations. The Fox musical comedy Glee and AMC’s drama Mad Men was the leader of the year with 19 nominations and with 17 nods. At the 62nd annual Emmy Awards, the majority of the statuettes won their first Emmy award, although almost all were familiar faces.

Eric Stonestreet who was among the newcomers at the Emmy Awards 2010 won for Outstanding Supporting Actor in a Comedy Series, “Modern Family.” In “Modern Family”, he plays the silly, somewhat overweight Cam in the gay couple that makes up 1/3 of series the portrayed on the show. 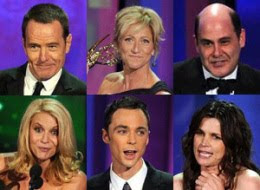 For actress in a drama series, Kyra Sedgwick won her first Emmy. She plays the sweet-as-sugar and hard-as-nails L.A. cop in TNT’s “The Closer,” while Bravo’s “Top Chef” places a stunning end to the reign of CBS’ “The Amazing Race,” which had won for competitive reality series seven years in a row, from the time when the category was made by the Academy of Television Arts & Sciences.

“Glee,” which was leading in the award season with 19 nominations, picked up two statuettes for first-timers. For playing ultra-competitive cheerleading coach Sue on Fox’ “Glee”, Jane Lynch won Emmy award as supporting actress (Lynch was almost unrecognizable as she traded in her track suit for a sleek off-the-shoulder sheath.) Ryan Murphy, creator-producer also won for comedy director for his work on the series pilot. In a statement, he said that the series was “about the importance of arts education” and dedicated it to all his teachers.

Edie Falco won her fourth Emmy but this time in the comedy actress category as the pill-popping “Nurse Jackie” in the darkly comic Showtime series. Previously, she is best known for her Emmy-winning role as Carmela Soprano in “The Sopranos.” 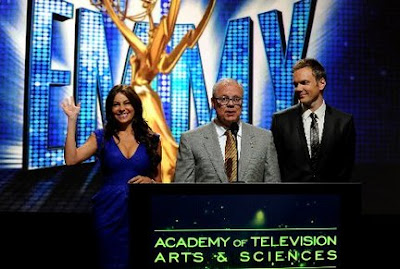 Also, there were several winning lines that showed no sign of slowing. For the third year in a row, Bryan Cranston won for lead actor in a drama for “Breaking Bad.” Steve Levitan and Christopher Lloyd for comedy writing, writing for a variety, musical or comedy special were included in other winners of “Modern Family’. Also, Bucky Gunts won Emmy award for directing a variety, music or comedy special for directing the opening ceremony of the 2010 Winter Olympics.