Easy A is romantic comedy film which is going to release on September 17, 2010. The lead characters are Emma Stone, Penn Badgley, Lisa Kudrow andThomas Haden Church . It is directed by Will Gluck and written by Bert V. Royal. Produced by Will Gluck, Zane Devine and Mark Benton Johnson. It is partly enthused by the novel The Scarlet Letter. 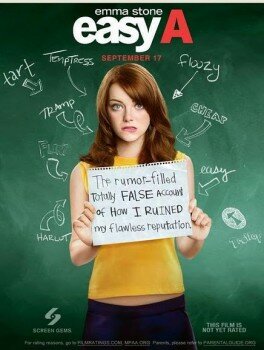 Story:
Olive Penderghast(Emma Stone) lies about losing her virginity to her gay best friend, Brandon (Dan Byrd), she sees her life paralleling the story of Hester Prynne’s in “The Scarlet Letter.” Threads of rumors in order to bring down her reputation is started by rival Marianne (Amanda Bynes) and force her to leave the school. Then she makes a decision to use the rumors for her own advantage, to advance her social and financial standing.

What we have seen in the clip, Emma totally rocks her performance. This is her first chance to fly solo on a project and she really made “Easy A” her own. That entire conversation at the end between her and her ex-friend made us laugh out loud. Emma does not have to do it alone, Stanley Tucci in the clip as Olive’s father, Dill, and found him to be hilarious. He is a talented actor but we love him in comedies. “Easy A” also stars Cam Gigandet, Amanda Bynes, Penn Badgley, Lisa Kudrow and, Malcom McDowell.