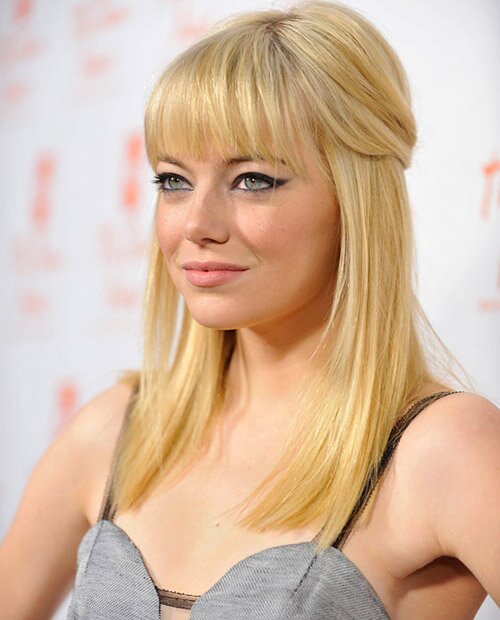 First time 22-year-old actress, Emma Stone colored her hair in dark brown for her first role as teenager then for the role of movie ‘Superbad’ she changed her hair color from a brunette to a redhead. Recently, she changed again her signature red locks into new platinum blond hairdo. Emma first time appeared with her blonde hair during December’s Trevor Projects annual ‘Trevor LIVE’ event in Hollywood, California. Afterwards, Emma Stone showed off in 2011 Golden Globes Awards in which she was nominated as Best Actress – Motion Picture Musical or Comedy for 2010 teen comedy film “Easy A.”

The actress of “Superbad” and “Easy A”, Emma Stone will be casting her role as Gwen Stacy, opposite Peter Parker (Spider-Man) in upcoming Sony’s “Spider-Man” movie. The role of Peter Parker will be played by Andrew Garfield in this movie.

Emma said to InStyle, “It’s my Spiderman hair! Blondes do have more fun! But sometimes I look in the mirror and still feel like I’m wearing a wig.”

When the cast of the next Spider man reboot was declared, many fans supposed that Emma Stone would be perfect for the role of the redhead Mary Jane Watson. But, they were surprised while they knew that Emma will play role as Gwen Stacey. She looks extremely attractive or impressive in blonde with straight bangs because this hairstyle suits her face shape well. The “Spider-Man” reboot movie will be released in 2012.

Emma said to The Independent, “When I first moved to L.A., I had this agent who thought, because I was blond, that I only wanted to play cheerleaders,”. “So she’d send me out for all these parts where they thought: ‘What a weird 15-year-old. It’s not going to work out!”

She also said, “I don’t know if anyone necessarily underestimated me as a blond – I think I just had a crappy agent. So one day, in a fit of trying to do something different, I just dyed my hair dark brown and got my first role a week later, after which I thought: People are closed-minded, man! Like a different hair color changes everything!”