Everyone becomes shocked by hearing the result of DWTS season 11. Brandy & Maksim leaves the show due to the lowest scores while Bristol & Mark secure their place in the finals of Dancing with the Stars 2010. 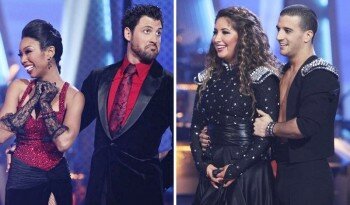 Bristol scored total 47 marks, adding both the performance, i.e. Argentine Tango and Samba, which was the lowest score of Monday’s night performance. But, audience voting saved her and this showed that she is much loved on the dance floor. Brandy & Maksim got 57 marks, which is 10 marks more by Bristol. But unfortunately, they lost the show. On that day, she performed with a yeti-shaped monkey costume and it became pink cocktail dress when she teared off her dress.

“I don’t know how I feel right now,” said tearful Brandy who was amazed by the announcement. Judge Bruno Tonioli back up the result that was a shocking elimination and he had expected Brandy to do freestyle in the finale. He also gave an invitation to the singer to appear on the finale anyway, but Brandy didn’t reply.

“This year has not been about the dancing,” complained the chief oddsmaker for the Wynn Las Vegas casino, who figured Palin only had a 4-to-1 opportunity to continue in the contest. “This year is about popularity, and whether it’s the Republican Party or whoever, Bristol Palin is getting more votes despite being the worst dancer.”

In the 9th Episode of DWTS season 11, each celebrity contestant had to execute a solo in their Latin dance. Jennifer & Derek got two perfect scores, 60/60, and reached at the top of the leaderboard while Bristol & Mark received their highest score of the season, 27/30 for their Paso Doble, but the lowest score (53/60) of the episode. Brandy & Maksim had to leave the show in spite of earning a perfect 30 for their Argentine Tango. Despite being at the bottom of the leader board, Bristol & Mark have been escaped elimination fourth time.

Tagged with 2010, Dancing with the Stars, Performance, result, video