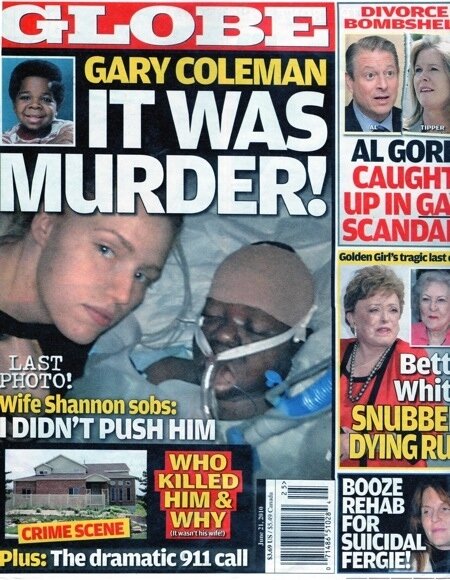 Coleman’s deathbed picture shows Coleman in a hospital bed with a bandaged head and tubes attached to his body while his ex-wife Shannon Price poses staring into the camera next to him.

Shannon Price is being accused of selling the pictures to the Globe tabloid Magazine for $10,000 and is facing allegations of foul play in Coleman’s death. American Media who is the Globe’s parent company, confirmed that they purchased the picture.

A will that was signed in 1999, named Dion Mial to be the executor. Dion accused Shannon of selling the deathbed pictures to the Globe,but was unable to stop them from publishing them. Shannon’s press rep didn’t deny the claim,but said that she needed money to help Dion pay for a lawyer. Gary and Shannon were legally divorced when Gary died,but Shannon was legally granted rights to make medical decisions for Gary. You can read the story at CBS news.

Price was divorced from the 42-year-old actor but the two shared a home together in Utah when he suffered a fall on May 26 that caused a brain hemorrhage. Globe are running the photo with a story about how Gary Coleman was murdered, how he was the victim of ‘shocking foul play’ and that a ‘top investigator’ came to this conclusion after examining the blood spatter on the kitchen floor where Coleman was found.

Who in their right mind would pose like this next to a dying person, much less someone you shared your life with? She is obviously profiting from his death and has cleaned out his house of everything she wanted.

Todd Bridges, who starred with Coleman in “Diff’rent Strokes,” vented on Twitter about the photos and said “To find out pics of Gary Coleman in his last days got out I hope someone burns in hell for this one …Only one person could be behind this and this is so dang sick to say you love soneone and do this yeah right that’s real love al.”